No secondary reaction on the horizon

As I explained here, the primary trend was signaled as bullish on 7/22/22.

In my 8/26/22 post, I explained the development of a secondary (bearish) reaction against the primary bull market.

The charts below display the current situation. The brown rectangles highlight the pullback (secondary reaction) that developed against the then-existing bullish trend. The red horizontal lines show the primary bear market lows which have been jointly broken down. The small grey rectangles highlight a mini-rally that did not meet the requirements to set up both ETFs for a primary bear market signal (we need at least two confirmed days, and some "extent"). Please remember that under the Dow Theory, we have alternative ways to signal the trend change, which enables us to always have a “backup” plan in all market environments. Please read this post to know more. You need to know more. One thing is the “casual” application of the Dow Theory (which is doomed to fail).  Another thing is to dig deeper into its understanding to master one of the best trend-following methods.

I explained in my 8/26/22 post the development of a secondary (bullish) reaction against the primary bear market and the setup for a potential primary bull market signal.

a)      The primary bear market has been reconfirmed.

c)      The setup for a potential primary bull market signal has been canceled too.

So now, both the longer and short-term oriented renderings of the Dow Theory are in gear. Both are bearish.

Below you have the updated charts displaying the most recent price action. The blue rectangles show the secondary (bullish and now aborted) secondary reaction against the primary bear market. The brown rectangles highlight the pullback that set up TLT and IEF for a potential (please mind the word) primary bull market signal, which was canceled by the confirmed lower lows. The red horizontal lines display the 6/14/22 primary bear market lows,  which have been jointly broken down.

As with any long-term trading system that seldom triggers signals, performance should be evaluated by taking a sufficiently long observation period (I'd say at least 5-6 years for a portfolio and 10 years if dealing with one asset class alone). The link below offers you an evaluation of the outperformance and drawdown reduction operated by the Dow Theory when appraising the trend with TLT and IEF:

Posted by The Dow Theorist at 7:26 PM No comments:

Free virtual Event at the MoneyShow. Join me to learn how to build a Dow Theory-based portfolio with ETFs

Join me Live in Person at the Virtual MoneyShow next September 27, 2022 (12:50 pm to 1:20 pm EDT). I will explain how to use the Dow Theory to trade all kinds of ETFs, to build a diversified portfolio with marked drawdown reduction and significant outperformance with just a few trades per year. You will learn how to avoid bear markets and deep corrections and get aboard with the ETFs that stand to profit most when a new bull market starts. Finally, I will explain that defensive sectors are not the best way to protect your portfolio.

Save a complimentary free spot while space remains and set a reminder to join me live on any streaming device, by clicking on the link below.

I hope to see you there, 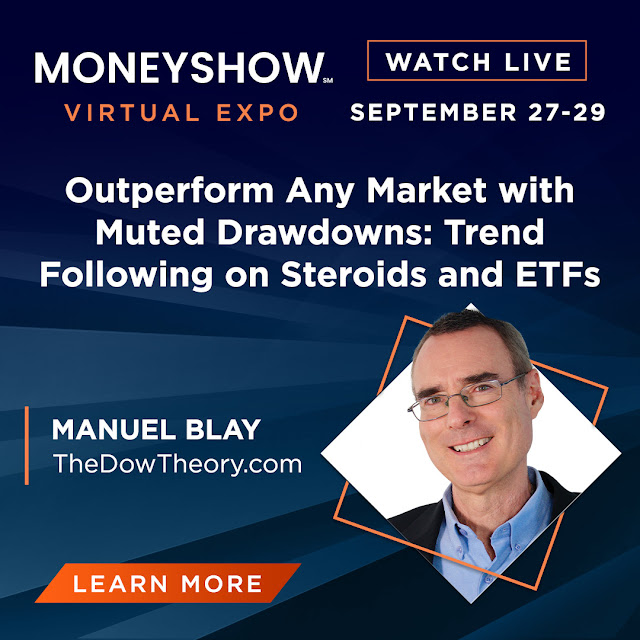 Editor of thedowtheory.com
Posted by The Dow Theorist at 10:35 AM No comments:

The answer is: YES. The article linked below penned by William Goetzmann  proves that the market calls made by Dow Theorist Hamilton from 1902 to 1929 beat buy and hold on a risk-adjusted basis.

The edited chart below extracted from the linked article shows that the source of outperformance (green line above the red line) are bear markets for Buy and Hold. By avoiding drawdowns (DD), the Dow Theory has lower volatility and, over time, builds up outperformance. 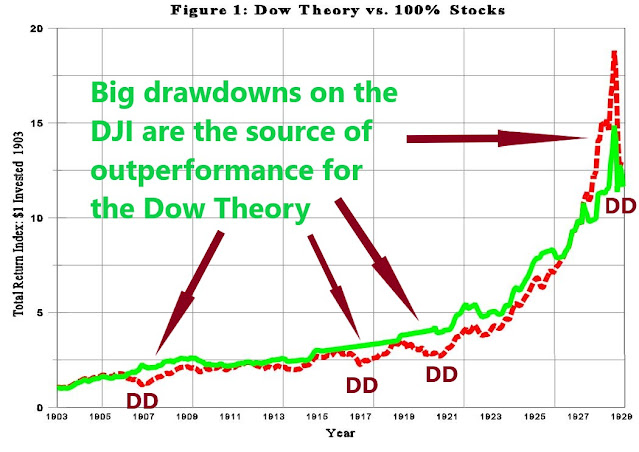 If the chart had included 1929-1932, the DT would have outperformed not only risk-adjusted by also on a very absolute basis. Regrettably, Hamilton died shortly after the October 1929 crash. On our website, we keep the updated record for the classical DT. As a reminder, our own rendition of the DT, namely, the Dow Theory for the 21st Century, is even more reactive than the "classical" one, as you can read here.

Posted by The Dow Theorist at 2:33 PM No comments: