Dow Theory Update: Does the Dow Theory work when applied to US bonds? (III)

Comparisons between the Dow Theory, a moving average system and Buy and Hold

In the previous two posts of this saga, we saw that both TLT and EDV vastly outperformed B&H while dramatically cutting drawdowns.

Inquisitive minds could think that, after all, the period examined was overall bullish and that any trend-following method could have worked as well. Two remarks:

·        1) A persistent bullish trend is not the best environment for any trend-following method. Trend-following systems need drawdowns to have the opportunity to (a) avoid drawdowns; (b) buying at a lower point than the previous sell. When markets go up in a straight line, no trend-following system can outperform. Thus, the predominantly bullish market mode during the period tested is not the best for the Dow Theory. Ideally, the Dow Theory would be delighted to see a drawdown of -50% every year followed by a 100% recovery. Thus, while the market would be going nowhere year after year, we could be making a return of 63.63% p.a. (assuming we get out 10% below a top at 100, exit at 90, and we buy 10% above a bottom at 50 which is a Buy at 55. Our exit price at 90 divided by 55 (entry price) equals 63.63%. An interesting study proves that the best years for Buy and Hold are not the best years for the Dow Theory (it continues to “perform” but does not “outperform”, here.

·       2) As to the assertion that any trend-following method would have performed equally well, I also beg to differ. To this end, I tested a moving average system (MAS) applied on TLT. The rules, replicable and straightforward, are as follows:

b. If the closing price is greater than the “n” day’s average, and we are flat, we buy at the close.

c. If the closing price is smaller than the “n” day’s average, and we are flat, we sell at the close. There are no shorts.

d. Rules “b” and “c” have been applied in two alternative ways. The first test does not require confirmation. We derived the signals just from TLT.  The second test required confirmation from IEF. In other words, the moving averages of both ETFs should be signaling “buy” or “sell” to take a signal.

e. The test starts and finishes on the same dates as the one we did with the Dow Theory.

Here you have the spreadsheet with the MAS results. I divided it into two halves to help you visualize. Test 1 is without confirmation. Test 2 (bottom line) is with confirmation.

We derive the following conclusions:

1. The MAS without confirmation lost money during the period tested. No wonder it resulted in overtrading (51 trades). To reduce the number of trades, one should have chosen a very long moving average or monthly bars. With monthly bars, many moving average systems look decent (albeit no match to the Dow Theory). However, using monthly bars is kind of cheating. Past tests look quite OK but underestimate the potential for huge drawdowns. Can you imagine trading with monthly bars in March 2020 or October 1987? Since the Dow Theory is traded on daily bars, logic has it that its “competitors” you stick to the same timeframe. In a future post of this blog, I will further debunk many half-truths about moving averages. 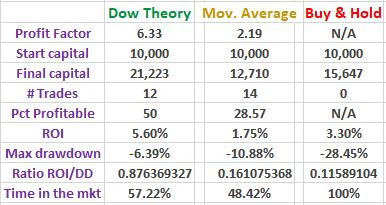 If we account for dividends distributed, B&H would have had a slightly better performance due to the dividends distributed by TLT (what is called “total return”). However, the Dow Theory and MAS would have also partially benefited from dividends when they were in the market. Furthermore, when being out of the market (bear markets in bonds which typically imply higher short-term interest rates), money could have earned some interest invested in 90-day T-bills.

As to the system’s accuracy, the Dow Theory is much more precise at catching trends than the MAS. A P.F. of 6.33 v. 2.19 is a huge difference. No wonder the Dow Theory had a larger final capital and a much more significant ROI (return on investment) 5.6% v. 1.75%. The maximum drawdown (close trade basis) for the Dow Theory was comparatively smaller than that of the MAS. However, the MAS, as with any relatively good trend-following system, managed to cut the drawdown by more than half when compared to B&H. The MAS managed to beat B&H on a risk-adjusted basis as the ratio ROI/Max Drawdown equals 0.16 for the MAS v. only 0.12 for B&H. The higher the ratio, the better. By the way, the Dow Theory scored a ratio of 0.88, beating by a huge margin both B&H and the MAS. If you think it over, you’ll realize that my ceaseless praise of the Dow Theory is no hype. It is well-grounded. Of course, it is easier to understand simple albeit suboptimal systems than to master the Dow Theory. Nonetheless, the Dow Theory is not a black box, and any practitioner willing to become proficient can do it.

And what about EDV, the longer duration ETF, when we apply the MAS system to EDV? I test EDV we also get mediocre results when compared to the Dow Theory. Below, you have the spreadsheet with the MAS results. I divided it into two halves to help you visualize. Test 1 is without confirmation. Test 2 (bottom line) is with confirmation.

While EDV managed to be profitable without confirmation (Test 1), scoring a modest Profit Factor (PF) of 1.31, the principle of confirmation added value as well (PF 1.60). Below you have a table comparing EDV under the Dow Theory, with the MAS and B&H: 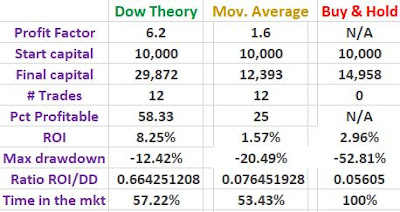 As with the MAS applied to TLT, EDV’s underperforms B&/H. However, as with most trend-following systems, drawdowns are cut by more than half by the MAS (the Dow Theory cut them by 76.5%). If we look at the ratio between the ROI and max drawdown, we observe that on a risk-adjusted basis the MAS was better than B&H (0.076 v. 0.056). The Dow Theory trounces both B&H and the MAS by scoring a ratio of 0.66.

The takeaway is clear: The Dow Theory works, as I have proven in many posts. It works with interest rates, precious metals, their ETF miners, oil, and  interest rates. The same pattern of outperformance and drawdown reduction repeats across markets. If you want to understand why it works, you may read this post.

Posted by The Dow Theorist at 4:50 PM