Dow Theory Update for April 22: A not so clear-cut primary bull market signaled on 4/21/2021 for GLD and SLV

At the very least, it is a good risk-reward buy

Today I am going to focus exclusively on SLV and GLD.  Please find the most recent post on US stock indices, SIL/GDX and TLT/IEF here.

Please read carefully my 4/5/2021 post and the link contained herein.

I quote the final paragraphs of such a post:

“I spot, though, three developments on the charts.

Thirdly, I explained the formation of a “line” (narrow range) on my April 1st, 2021 post.  Such a line was broken by SLV unconfirmed by GLD, which, if not bullish, is undoubtedly not bearish, at least short-term.

So, while it is much too early to declare the primary bear market dead, I see for the first time since late November 2020 the first “green shoots” within a primary trend that remains bearish to this day. A confirmed breakup of SLV’s line top (3/17/2021 @24.42) and GLD’s (3/17/2021 @163.61), and depending on the time of the rally that would lead to such a breakup, one could consider a change of the primary trend from bearish to bullish. We have to mark the vital 3/17/2021 closing highs on our charts.”

As a reminder, the breakup concerns the upper boundary of a “line”, not of a secondary reaction high. Rhea wrote that the breakup (down) of a line indicates:

“a change of the general market direction of at least secondary, and occasionally even of primary, character”.(The Dow Theory, 1932, Barrons, page 80).

I feel in this specific instance, the change of the trend is of primary character for the following reasons:

2. There has been divergence and a non-confirmation of lower lows, which is bullish (see above).

3. The secular trend is bullish (so there is a tail-wind for bullish movements).

4. Since the last primary bull market top, SLV & GLD have been declining for ca. 8 months. So time-wise, the primary bear market is getting old; particularly when measured against a secular bull market.

5. The rally off the respective primary bear market lows has proceeded smoothly (and hence took several days until the final breakup; it was not a volatility flare). I favor (and research confirms) rallies with gentle daily advances and a majority of “up” days, rather than rallies with abrupt “up” days followed by “down” days. The less "zig-zag", the more likely the trend will continue into the future.

6. Finally, as shown on the table below, taking a trade right now has a relatively tight stop-loss (last recorded lows). If a real good rally materialized, we would be having a good risk-reward. Waiting for a more “text-book” Dow Theory signal entails a much looser (and hence risky stop-loss). More about two alternative Dow Theory bull market signals some paragraphs below.

So based on all the preceding considerations, I feel I can act as if the primary trend had turned bullish. Of course, the confirmed violation of the 3/30 (SLV) and 3/8 (GLD) bear market lows, would imply a bearish reading for both the primary and secondary trend.

I final note on volatility. SLV was well above the minimum movement adjusted for volatility (more about this concept here). GLD is a little bit below it. However, given that we are not dealing with a “typical” signal, and given that the rally off the lows till breakup day lasted 15 (SLV) and 22 (GLD) days, I feel I can live with a 4.46% rally for GLD.

Those wanting to play more conservative should wait until a 100% interpretation-free Dow Theory signal is given. Be advised, though, that both Schannep (Capitulation indicator, here and here) and Rhea know how to recognize bottoms with a good risk/reward ratio and act swiftly.

There are two alternative “interpretation-free” Dow Theory primary bull market signals. The first to be materialized would change the primary trend from bearish to bullish:

1. The first one, entails the breakup of the last secondary reaction closing highs (1/5/2021). SLV broke them up on 2/1/2021, unconfirmed by GLD. So, once GLD broke up its 1/5/2021 secondary reaction highs, it’d be undisputable that the primary trend has turned bullish.

2. The second one entails the breakup of the highs of the last completed secondary reaction (the first one of the current bear market).  I have written profusely (i.e., here and here) about the importance of the highs/low of the last completed secondary reaction (not the current one, but the previous one). The closing highs of such a reaction were made on 11/6/2020 for both SLV and GLD. On 12/7/2020, SLV broke up above its closing highs, unconfirmed by GLD. Once GLD deigned to confirm, the primary trend would be bullish.

Please spare me the calculations, but  waiting for a "clear" "interpretation-free" Dow Theory signal, would imply a much broader stop-loss, as the breakups would occur at a very high level (i.e. ca. -14% for GLD).

I refer to my last post, as the technical situation for gold and silver has not changed.

A) Market situation if one is to appraise secondary reactions not bound by the three weeks dogma.

The primary trend was signaled as bearish on 11/23/2020, as was profusely explained here.

Unlike silver and gold, no line has formed as no tight range has occurred.

As to the extent requirement, let’s look at the table below:

We observe that the rally greatly exceeds the volatility-adjusted minimum movement.

My rule of thumb is that the greater percentage-wise the rally or decline, the less stringent I should be with the time requirement. In this specific instance, the extent of the rally amply exceeds the minimum volatility. Hence, I feel that we can declare a secondary reaction with just 12 trading days for SIL. Furthermore, 33 trading days for GDX and that SIL’s 3/30/2021 lower low was not confirmed by GDX further advocates for the existence of a secondary reaction. The secondary trend is now bullish, and the primary trend remains bearish.

Now we have to wait for a pullback in order to have the setup for a primary bull market signal. What if we don’t get such a pullback, and SIL and GDX continue making higher highs? We have to pay attention to the closing highs of the last completed secondary reaction (blue horizontal lines in the charts below). I have discussed on many occasions on this Dow Theory blog the importance of the highs (lows) of the last completed secondary reaction as critical points to determine a change of the primary trend (i.e., here and here).

More details about the setup that led to the current bear signal here.

All in all, the primary and secondary trend of SIL and GDX is bearish.

In the last few weeks, and after months of systematic bearish readings, there have been three moderately bullish developments.

a) A line (narrow range) has formed which has been broken topside.

c) Furthermore, a secondary (bullish) reaction against the primary bear market has been signaled.

The table below (and charts) explain the development of a line. 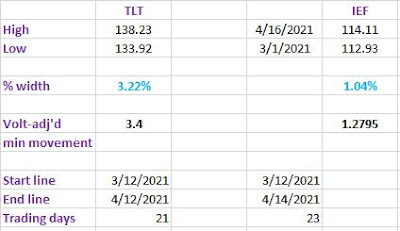 As you can read, the line has lasted more than 2-3 weeks (minimum time requirement), and its width is tight enough. When dealing with US stock indexes, Rhea required a range of 5% or less to declare the existence of a “line”. Since TLT and IEF have (usually) lower volatility than US stock indexes, we have to perform a volatility adjustment. As you can see in the table above, both ETFs remain within the volatility-adjusted maximum width.

The line was broken topside on April 15th, 2021. Rhea wrote that such a breakup entails at least a movement of secondary proportions (that is, a secondary reaction against the primary bear market). Even if we considered this line alone, we would conclude that the secondary trend has turned bullish.

On 3/31/2021, IEF made a lower low unconfirmed by TLT. Such a non-confirmation increases the odds for a change of the secondary trend.

As to the secondary reaction, I refer to the table below:

As you can read on the table, TLT rallied 4.8%, and IEF rallied 1.48%. Both exceed the volatility-adjusted minimum movement. As to the time requirement, TLT rallied for 19 days and IEF for ten days. Given the existence of a line broken topside and the non-confirmation of IEF lower low, I feel we can declare with confidence that the secondary trend has turned bullish.

Here you have the  charts displaying the current technical picture. The white line highlights the line, whereas the blue rectangles display the ongoing secondary reaction:

While, according to the Dow Theory, no primary bull market signal has been given, those brave of heart might test the waters by starting a modest long position. I see two positives for such a trade:

b) Three moderate bullish developments have occurred: A non-confirmation, a bullish breakup of a line, and a bullish secondary reaction. While the addition of three “moderate” bullish factors does not result in a primary bull market, I see, though, that something is changing on the charts.

The primary trend and secondary trend were signaled as bearish on January 6th, 2021, as was explained here.

I also feel that the secondary trend has changed from bearish to bullish when one strictly demands three or more weeks for a secondary reaction to exist. Why?

Rhea made clear that the breakup of a line entails a change of the secondary trend. The “mainstream” application of the Dow Theory does not preclude the appraisal of lines. Lines are part and parcel of the Dow Theory (another issue is that many “classical” Dow theorists miss them).

Thus the breakup of the line implies a change of the secondary trend, even though the time requirement for a secondary reaction would not be met.

Now we have to wait for a pullback to get the setup for a primary bull market signal.

Here you have the updated charts.

Posted by The Dow Theorist at 6:54 PM No comments: