Dow Theory Update for August 29: A closer look at gold and silver


No secondary reaction for stocks yet

The primary trend is bullish since November 21st, 2016, as explained here and here.

The primary trend was reconfirmed on July 3rd, 2017 as was explained here

In spite of recent declines, no secondary reaction has been signaled, as explained here

The primary trend was declared bearish on July 7th, 2017, as explained here and here

From the 8/15/2017 closing lows (which did not setup precious metals for a primary bull market signal), both SLV and GLD have made higher closing highs.

The primary trend is bearish, as was explained here and here.

The secondary trend is bullish as explained here

As was explained here, SIL and GDX have set up for a primary bull market signal.

While technically nothing has been accomplished, price action of the recent days has put GDX close to breaking up above its secondary reaction closing highs. SIL, nonetheless, seems to be very far from doing so. All in all, we are still far from a primary bull market signal.

Dow Theory Special Issue: Isolating the value of the principle of confirmation and trend following

How much valuable is confirmation percentagewise? And trend following?

It’s been many months without writing a post with some original thoughts which may be useful to the followers of this blog. For the last few months I have been confined to merely analyzing the markets (which in itself is OK and takes time) without any time left for unearthing knowledge about the markets. The illness of my mother which is not over as of this writing has really taken a toll on my time to cogitate and write.

When I find time, I’d like to take de S&P 500 (or the Industrials) as back as I can, and just apply the Dow Theory rules without the rule of confirmation. Thus, i.e. if we saw a +3% decline which lasted 21 days, we would declare without further ado that a secondary reaction is in place without regard to other indices. If thereafter, the S&P 500 rallied for at least two days 3% or more, we would declare a setup for a primary bear market signal, etc. Buy and sell signals would be determined by just using all the Dow Theory rules, except the principle of confirmation.

I’d like to see the difference in performance (and depth and length of drawdowns) when the principle of confirmation is done away and compare it with the well-publicized track record of the S&P 500 (or the Industrials for that matter) when applying the Dow Theory. More about the “classical Dow Theory” track record here

However, for the time being, I don’t have the time to carry out such a study in order to prove my assumption, namely, that performance will decline and drawdowns be likely deeper and last longer when the principle of confirmation is done away with.

Luckily, Meb Faber of mebfaber.com some weeks ago penned a very short article named “Modern Dow Theory”. While what he did is not exactly the Dow Theory (this is maybe why he calls it “modern”), his article highlights the importance of the principle of confirmation. Meb reviews the S&P 500 performance from the late ninety twenties to our days under a set of different rules.

Observations to the first rule: According to the S&P 500 return calculator (https://dqydj.com/sp-500-return-calculator/ ) the average annual return since 1928 to July 2017 amounts to 5.663%. This is gross return without deducting for inflation and without dividends reinvested. We just want to measure the price action of the index and perform an apples to apples comparison. If inflation helped boost nominal returns, we don’t care, as it is also tailwind (bullish bias) for trend followers.

Here you have a screenshot: 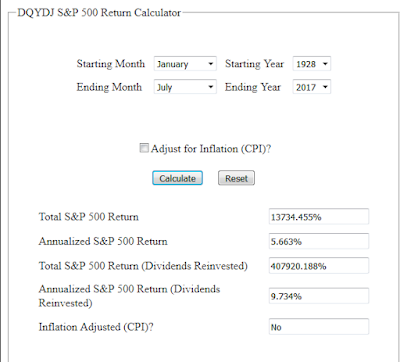 It is worth mentioning that this +7.937% outperformance is made in spite (or maybe thanks to) of being out of the market almost 48% of the time (when there was divergence between the two indices and no position was taken). The less time in the market, the lesser risk of decimating drawdowns.

Observations to the second rule: Here we isolate the power of trend following alone. If the S&P 500 is bullish positive returns are achieved in spite of the negative trend of the Utilities. 11.5% annual is much more than the 5.663% made by buy and hold. Thus, the outperformance which can be attributed to pure trend following (the trend of the index traded in spite of a diverging trend in other index) amounts to 5.837%.

Observations to the fourth rule: I always insist that trend following and, more importantly, confirmation shine when the going gets tough. When bearishness is confirmed, performance sinks to an abysmal -0.8%. If we compare the performance with unconfirmed bearishness (only the S&P 500 is bearish) with confirmed bearishness, we can isolate the value of the principle of confirmation in bear markets. The difference between -0.8% minus 5.6% equals a whopping -6.4%. In other words, in bear markets the principle of confirmation adds 6.4% of performance (that is helps to avoid a loss of -6.4% p.a.).

Some readers might be thinking: If just using a 200 days moving average with only one index historically has delivered +11.5% why on earth losing one’s time with the Dow Theory, various indices, confirmations, just to add ca. 2% p.a..? Well the answer is as follows:

Firstly, 2% p.a. makes a huge difference in performance in the long run.


If you are still exceptical as to why drawdowns should be avoided, you’d better read my post “Why drawdowns matter”

Thirdly, while using moving averages is less difficult than applying the Dow Theory, if feel that the Dow Theory (be it the classical or Schannep’s) clearly excels as it is non parametric and is less prone to whipsaws. More about this vital aspects here and here.