This is an important post as it will dispel some trend-following myths. I plan to expand this post in the future or write additional posts on this subject.

1. It must reduce drawdowns. Yes, this is the first requirement, not the quest for outperformance.

2. It must be a source of outperformance using the very benchmark index (i.e., the S&P500). We must do something other than trick by using specific stocks and comparing their performance to the benchmark. It must be an apples-to-apples comparison.

3. It must trigger seldom. Anyone trading typical moving averages knows that when the price is near the average, spells of overtrading arise.

Points 3 and 4 deserve special attention. A common problem with moving averages (MA) and rate of change systems is the risk of being repeatedly whipsawed when the price sits near the moving average. To avoid such whipsaws, many people advocate using monthly bars instead of daily bars, which limits trades to at most one per month: problem fixed. Right? You use a MA based on monthly bars, and we kill two birds with one stone: We fix the whipsaw problem and increase performance. However, if we look under the hood, we observe that cutting down the number of trades comes at a huge price: The risk of being caught wrong-footed in sudden crashes increases exponentially if we just have one day per month to exit. Most trend-following strategies based on monthly bars would not have escaped early enough before the great sudden crashes occurred. Very few investors can remain disciplined in trading a system that does not react when the markets start falling in earnest. One thing is to look at a backtest (“I would have ridden the storm in March 2020, as the market went back again”). One different thing is to stick to the system when real money is on the line. We should not underestimate our frailty. As legendary trader Paul Tudor Jones said "don't play macho with the markets".

So real investors, not paper ones, would resort to daily bars. However, as stated above, daily bars result in whipsaws and, worse, an evident inability to outperform buy and hold (at least if one does not cheat by applying the moving average to a top-performing stock and comparing it to the benchmark).

Thus, most trend-following systems are in a catch-22 situation: If I want to react early enough when a big drop sets in and cut drawdowns effectively, I will be unable to outperform B&H and will be overtrading in choppy markets. If I want to avoid whipsaws, then I’ll risk getting out (and “in”) too late. 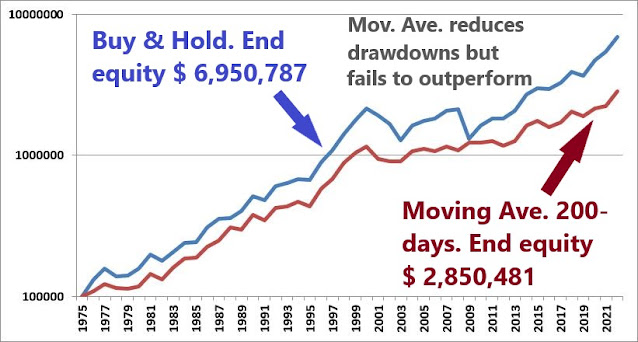 As you can see, the MA based on daily bars is good at dampening drawdowns but fails miserably at outperforming B&H. I carried out the test without slippage and commissions. If I had factored them in, the results would have been even more horrible for the MA. So, it is true that a MA may result in outperformance on risk-adjusted terms (lower return but even lower drawdown that B&H). However, MAs have a hard time beating B&H.

We observe that the two variations of monthly MA and the plain vanilla MA (without demanding in addition to the crossover that the trend of the MA is up or down for a signal) deliver a better risk-adjusted profile than B&H (Return/Max Drawdown, the higher the number, the better). We also observe that the MA based on daily bars had 166 trades v. only 37 for the equivalent based on monthly bars. There are no shortcuts. The breakout system fared poorly. While it cut drawdowns handsomely, it was an inferior performer, and risk-adjusted underperformed B&H.

All in all, you cannot expect wonders from “traditional” trend following. The only trend-following system that markedly outperformed B&H and delivered an outstanding risk-adjusted figure with a moderate number of trades was the DT21C. For those versed in the DT21C, it should not be surprising. The chart below says it all: While not shown here (this is the subject for another post in the future), my Blay Timing Indicator also managed to outperform B&H vastly, cut drawdowns, and keep the total number of trades low.

Posted by The Dow Theorist at 10:21 PM No comments:

As promised yesterday, I am reproducing and updating one post I penned two years ago comparing the 1987 and 2020 stock market crashes.

Yesterday, October 19th was the 35th anniversary of the 1987 stock market crash. I wrote about it in the past and made clear that the Dow Theory (of any flavor whatsoever) could get investors out of stocks before the big decline set in.

The Dow Theory for the 21st Century (what I affectionately call “Schannep’s Dow Theory) called the turn three days before the Classical Dow Theory did, as the Industrials broke down below their September 21st, 1987 secondary reaction lows on October 9th, whereas the S&P 500 did so on October 12th. Since we need the S&P 500 plus one other index to declare a primary bear market, on October 12th (S&P 500 at 309.39), Schannep’s Dow Theory proclaimed that the writing was on the wall. On the other hand, the “original” Dow Theory, which does not have the S&P 500, and needs the Transports to confirm, had to wait until October 15th (S&P 500 at 298.08) when the Transports finally deigned to break down below their September 21st lows. The S&P 500 made its closing highs on August 25th, 1987, at 336.77. So the total loss for Schannep’s Dow Theory was a well-contained loss of -8.13% for those trading the S&P 500.

However, the goal of this post is not to boast about past successes but to compare the 1987 to the 2020 crashes from a technical perspective.

However, there is a significant discrepancy between the two bear markets. The attentive analyst could see the 1987 crash (or at least a very severe correction) brewing, as there were many warnings, both technical and, for those with this inclination, fundamental or value-based.

I’ll focus on one of my pet indicators, which has stood the test of time when applied in proper context. The Advance/Decline line. For an accurate description of this line, go to investopedia. In essence, the advance decline line keeps a cumulative record of the difference between advancing and declining issues. A rally with a declining AD line implies poor following and tends to be a technical warning.

As you can see in the chart below, the AD line gave several warnings about the underlying weakness of the then-existing primary bull market.

However, the situation was different in the months leading to the February-March 2020 crash. While I will not clutter this post with charts, neither the 52 Weeks highs, the VIX, nor any other indicators warned in advance about the incoming bear market.

Here you have a chart of the S&P 500 and the AD line. As you can see, the AD line confirmed higher highs made by the S&P 500. So, nothing in the AD line suggested underlying weakness.

This is why it is essential to honor your Dow Theory-based stop-losses. While background information may be helpful in some specific instances (i.e., in 2007 when weakness in the Transports advocated against being long), we cannot second-guess a primary bear market signal. As traders say: “The first loss is the best loss.”

Posted by The Dow Theorist at 11:20 AM No comments: