Dow Theory Update for April 26: Shorting US bonds with the Dow Theory. Does it work?

Readers of this blog should know by now that the Dow Theory works. The measure of “working” is twofold: (a) drawdown reduction and (b) outperformance versus Buy & Hold (B&H).

I recently explored the “long side” of the Dow Theory with US bonds (ETFs: TLT & EDV). The results were outstanding, as you can read HERE, HERE and HERE

I performed two tests with TradeStation®:

The first one entails shorting EDV (the long-term duration bond ETF). The second one is going long TTT (inverse bond ETF). We had the following rules:

2. I shun the long side. Only short and covering to isolate the shorting ability of the Dow Theory fully.

5. The Buy (cover)/Sell (short) signals were derived using the TLT & IEF pairs. You may find the specific rules here.

Below are the results for EDV: 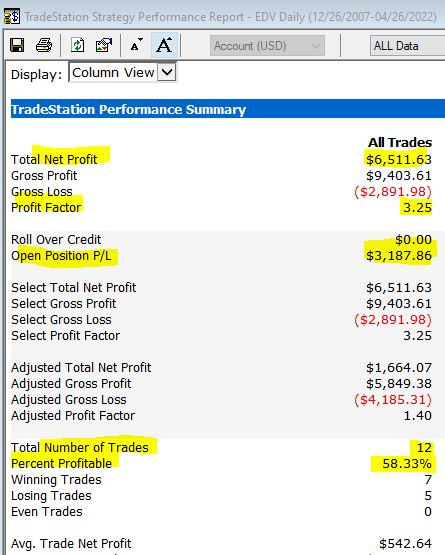 The Profit Factor for a "short" trade against a mostly bullish market during the tested period is excellent: 3.25. The profit factor is the ratio between realized profits a losses. The current open short position with an unrealized profit of $2,755 has not been computed, as we still don't know how it will end. Had it been included, the P.F. would have been much higher.

During the 14 years, three months, and 29 days tested, there were 12 closed trades. The current open trade is number 13. Hence, we get, on average less than one short per year—no overtrading.

The total time in the market was 44.95%. So if we adjust for time invested, the Dow Theory scores a very nice return.

However, shorting EDV may not be the only way to bet on higher interest rates. Another option may be to buy an inverse ETF like TTT. Since TTT's inception date was later than EDV, we got fewer trades, as the first short (long TTT) was taken on 4/27/2012. 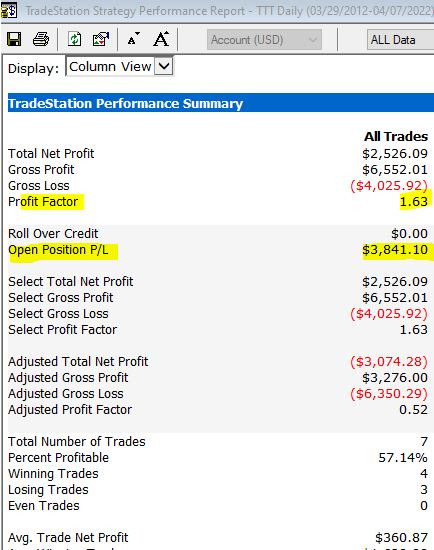 The good news is that irrespective of the way we short (outright or through an inverse ETF), the Dow Theory managed to be profitable shorting even when confronted with a period of overall rising bond prices. Couple these results with the good results attained by the Dow Theory going long with oil and precious metals swimming against a bearish tide, as you'll get an idea as to its robustness. So Dow Theorist Hamilton was right when he suggested that the Dow Theory could be applied not only to US stock indexes. It can even work on the short side against a secular bull market.

Posted by The Dow Theorist at 2:35 PM