Dow Theory Update: Does the Dow Theory work when applied to US bonds? (II)

In the previous post, I proved that the Dow Theory works well with US Bonds. We determined the trend by using TLT and IEF and applying the trend so appraised to TLT which corresponds to US bonds with remaining maturities greater than 20 years.

Today we are going to apply the very same trend assessed with TLT & IEF to EDV. EDV seeks to track an index of extended-duration zero-coupon U.S. Treasury securities. EDV offers more upside (and downside) potential than TLT given its longer duration. Without further ado, let’s examine the results. As to the rules used and other details, I refer to the previous post of this saga. The test starts on 12/26/2007 (closest primary bear market low to next Buy signal) and ends on 10/11/2021 (the last primary bear market low we know for sure, as the current one may go down further)—more details concerning the proper assessment of performance in this post.

I coded all the signals into TradeStation®. What follows is the computerized results. 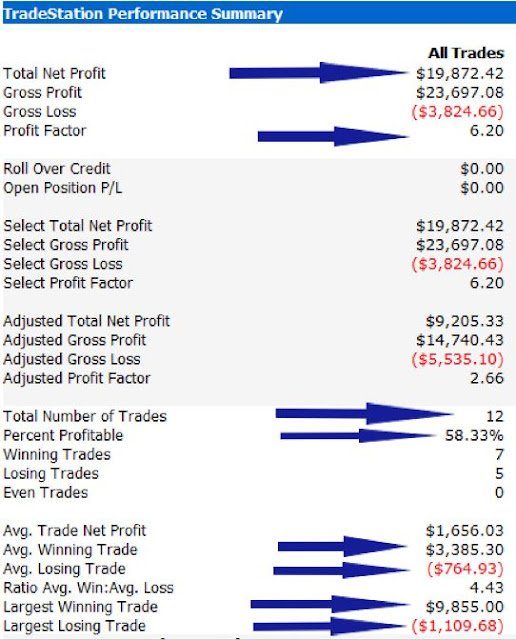 The second arrow shows the profit factor (PF). The PF is the ratio between gross profit (money won) and gross loss (money lost in losing trades). The PF is an excellent 6.20, which means that for each $1 lost, we make $6.20. Please mind that we traded EDV by applying the trend assessed by using TLT/IEF. Since all EDV, TLT and IEF are sensitive to interest rates, it is not so important the specific ETF applied to determine the trend. We found that GLD/SLV can be traded with the trend determined by using GDX/SIL, and QQQ can be traded by using the trade determined by the S&P500, DJI & DJT (as was explained in our March 1st Letter to our Subscribers). A high PF reflects the ability to “time trends.” The higher the figure, the more we catch the upside and avoid the downside.

The fourth arrow shows the percentage of winning trades: 58.33%. Investors should get this reality into their heads: it is unnecessary to win in most trades to succeed. One only needs to make more money when right (“let your profits run”) and cut losses short. The Dow Theory is, IMHO, one of the best trend following methods at cutting losses short without compromising the accuracy (measured by a high PF). Any trend following system can contain losses by placing tight stop-losses. However, the tighter the stop, the more the accuracy will degrade, and PF will decline. This is not the case with the Dow Theory. More about Dow Theory stop-losses in this old post. This is why I stopped reporting about the outcome of any given trade taken on this blog. The result of any given trade is immaterial, as it is like flipping a coin. Only when we have a string of trades (which under the Dow Theory means waiting for several years) does a picture of profits emerge.

Noteworthy is the time in the market: 57%. Accordingly, 43% of the time, we were out of the market. This strengthens the Dow Theory outperformance v. B&H. The Dow Theory increased the annual return by 178.7% v. B&H % by being in the market only 57% of the time. If we account for the missing time (178.7% increase in performance x 1.43 -time out of the market-), we would be outperforming B&H by 255.54%. Funds freed from trading bonds can be productively used in other markets (i.e., the stock market provided the trend, as appraised by the Dow Theory, is bullish too) or even 90-days t-bills which precisely use to pay a higher interest rate during bear markets in bonds. The specifics of rotating between bonds and US stock indexes will be given in the future to our Subscribers. Here it suffices to say that going to stocks (in a bullish mode) when US bonds are bearish results in additional profits.

The following chart helps you visualize the key figures: 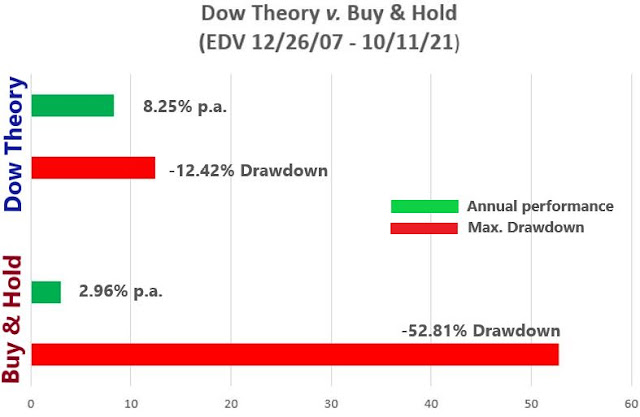 Well, EDV’s performance was even more stellar than that of TLT. A good decision might be to invest one half in TLT and the other half in EDV. By doing this, one will never be too right or too wrong. There are other options which will be maybe in the future explored.

This saga's next and final post will deal with other interesting aspects.