Below the updated charts:

Now, let’s take a deeper look at the pullback that followed the 4/22/2021 secondary reaction highs. As you can see in the table below, it lasted from peak to trough 14 trading days. The percentage decline was -3.41% for TLT and -0.99% for TLT, which is more than the volatility-adjusted minimum movement (more about this vital concept, here). So the pullback meets the time and extent requirement for a secondary reaction. 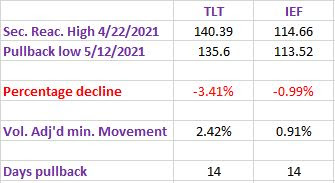 So now we have to mark the vital 5/12/2021 closing lows. If such lows were jointly broken down by TLT and IEF, a primary bear market would be signaled. This is an excellent risk/reward trade, as our stop-loss lies at ca. -3.5% for TLT and -1% for IEF.

“While, according to the Dow Theory, no primary bull market signal has been given, those brave of heart might test the waters by starting a modest long position.(…) Three moderate bullish developments have occurred: A non-confirmation, a bullish breakup of a line, and a bullish secondary reaction. While the addition of three “moderate” bullish factors does not result in a primary bull market, I see, though, that something is changing on the charts." (emphasis supplied)

Now let’s see what happens. Anything can happen in any given trade. We deal with probabilities, not certainties. However, when several trades pile up, a picture of outperformance and reduced drawdowns emerges.

The primary trend was signaled as bearish since January 6th, 2021, as was explained here.

I considered the secondary trend as bullish since 4/15/2021 as a “line” was broken up by TLT and IEF.

Unlike the “short-term” application of the Dow Theory (see above), the pullback that followed the 4/22/2021 highs does not qualify as a secondary reaction, as it didn’t reach the 15 trading days’ threshold. So while the pullback was enough to set up TLT & IEF for a primary bull market signal, it does not meet the strict 15 trading days requirement.

Here you have the updated charts:

Posted by The Dow Theorist at 9:33 PM

Email ThisBlogThis!Share to TwitterShare to FacebookShare to Pinterest
Labels: Dow Theory and bonds