The primary trend remains bullish when one appraises the trend of US bonds with a somewhat longer time-frame.

I still owe the readers of this Dow Theory blog the promised in-depth explanation of the current secondary reaction in SIL and GDX (the gold and silver miners ETFs). However, Dow Theory’s relevant events pile up, and I allot my time as good as I can.

This post focused on the primary bear market signal that has been signaled today in US bonds.

In this post, I provided a thorough explanation concerning the rationale behind my use of two alternative definitions in order to appraise secondary reactions.

A) Market situation if one is to appraise secondary reactions not bound by the 3 weeks and 1/3 retracement dogma.

As it was explained in-depth here, the final lows were jointly made on 8/4/2020. TLT declined for 18 trading days and IEF for 17. The final secondary reaction lows were made on 8/28 and 8/27. From those dates, there was a rally that lasted 5 trading days until 9/3/2020 on both ETFs. TLT rallied 2.96% and IEF 0.8%. As you can see in the spreadsheet below, TLT rallied much more than the minimum volatility-adjusted movement, and IEF did the same too (when measured against the 1000 days moving average of volatility). Please mind that, as I have repeatedly written in the past, the final rally (pullback) that sets up the ETFs for a primary bear (bull) market signal need not be confirmed in extent, just in direction. However, confirmation never hurts. Rhea made this point clear in his book “The Story of the Averages”. 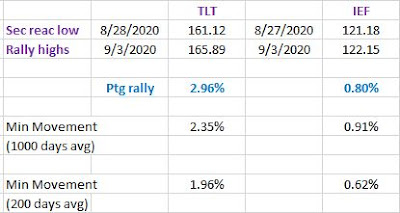 The breakdown has been on higher volume than the its 50 days average. So it was a relatively high volume day. However, it did not reach monster proportions. Notably, it remained below the 8/28/2020 lows for TLT (not so for IEF whose breakdown has been on higher volume). So volume seems to confirm the breakdown tentatively. However, volume readings are always to be taken with a pinch of salt. I’d say that price action provides 90% of actionable information, while volume may account for the remaining 10%. So, in my trading, volume is only a tie-breaker when price readings are not conclusive.

Finally, I see on the charts that the price action between 8/27/2020 and 10/2/2020 constitutes a “line” (narrow range in Dow Theory jargon). As a reminder, a “line” is a confirmed narrow range (5% between the upper and lower boundaries for US stocks), which spans at least 2 weeks. Today, that “line” has been broken down. Rhea wrote that:

“simultaneous advances above the limits of the “line”, indicate accumulation and predict higher prices; conversely, simultaneous declines bellow the “line” imply distribution and lower prices are sure to follow.”(emphasis supplied).

Thus, the breakdown of the “line” is another bearish factor pertaining to the Dow Theory, which I see on the charts.

So we can conclude that the secondary reaction closing lows of 8/28 and 8/27 were the decisive ones to be broken down for a primary bear signal. The break down occurred on October 5th, 2020, and hence, a primary bear market has been signaled. Now both the primary and secondary trend is bearish.

So from the primary bull market signal to bear market signal, almost two years have elapsed. This is quite in line with what we can expect of Dow Theory trades.

The spreadsheet below shows the profits realized: 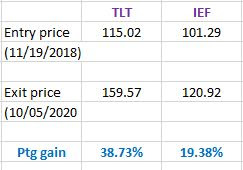 As a trader, I don't favor making a commitment to IEF due to its low volatility. IEF’s lower gain on this Dow Theory trade is entirely due to its swinging much less than TLT. As a reminder, TLT is based on +20 years bonds, whereas IEF is based on a much shorter term duration (7-10 years). While being necessary to derive Dow Theory signals (confirmation), IEF is not necessarily the best vehicle to invest in. However, those wanting to play very conservative might allocate some of their funds to IEF. Up to each trader.

“By the way, TLT’s confirmation of the higher highs made by IEF took quite a long time, namely more than 4 months. Belated confirmations tend to be a warning sign about the underlying health of the trend.”(Emphasis supplied).

While warning signs are on themselves not necessarily enough reason to act (i.e., to partially or totally sell), as we are trend-followers, they serve to validate further the signal we have got today. However, when such warning signs pile up (i.e., belated confirmation, divergences, ominous volume readings, price objectives reached, etc.), there would be nothing wrong with unloading “some” provided the trader has a definite re-entry plan. This is what we suggested in our September 1st, 2020 Letter to our Subscribers for US stock indexes. The pullback that followed attested to the wisdom of partially lightening up.

Perhaps I am wrong, but I see it constructive for US stocks that a decisive “down” day in US bonds has been met with a decisive “up” day in US stocks (albeit I’d be even happier if I had seen a somewhat higher volume). Are US stocks building up strength and no longer need the dope of extremely depressed interest rates? Just a thought.

The signal of 12/18/2018 was obtained by being strict and demanding on a confirmed basis at least 15 trading days on both ETFs.

Since the pullback from 03/09/2020 to 03/18/2020 spanned just seven trading days, and despite its vast magnitude, we could not declare the existence of a secondary reaction if bound by the three weeks' time requirement dogma. Subsequent declines did not close below the 03/18/2020 closing lows, and hence no secondary reaction was signaled.

Despite the most recent pullback and today’s lower lows, the secondary trend remains bullish, as was explained here.  Notwithstanding today’s decline, the amount of the bull swing (from the bear market lows of 11/02/2018 for TLT and 10/05/2018 for IEF to the top of 08/04/2020) retraced does not reach 1/3. So, when one sticks to the Dow Theory’s mainstream interpretation, the extent requirement has not been fulfilled.

Posted by The Dow Theorist at 9:41 AM