The first post of this saga set out the premises of our study while the second post, analyzed the outperformance of SLV/GLD versus Buy and Hold (BAH).

Today, we will see the outcome of the trades that were signaled on this blog “live” for SIL/GDX  since its start in August 2012. I repeat the word “live”. The performance is so impressive that it seems hard to believe it has not been “cooked”. However, I appraised all trends in “real-time” as they were happening, and posted accordingly on my two blogs.

The test spans. 8 years, ten months and 16 days (from 5/15/2012, bear market bottom before the first Buy signal and 3/03/2021 bear bottom before the current Buy signal). On 5/7/2021, the Dow Theory signaled a new long position. However, we cannot include it in our study as the trade has not been closed and the final lows following the future sell have not been made.

As for the highlights:

Total long trades: Six round trades. Each trade lasted almost 1.5 years, which fits with the “typical” classical Dow Theory duration for the average trade (more than one year). On each Buy signal (primary bull market), we take a ½ position in each ETF (GDX and SIL).

Final capital Dow Theory (starting at 100): 122.86, which translates to an outperformance versus buy and hold of 45.14%, that is ca. 5.08% p.a. Please mind that the negative “gravitational” force against long positions has been powerful during the period tested, as BAH suffered a maximum decline of -78.58%. Therefore, the outperformance of the Dow Theory versus BAH is remarkable. Confronted with a “negative force” of -78.58%, the Dow Theory managed to net out a positive 22.86% during the period under evaluation.

Now some observations and ideas for actual trading:

1. Unlike the SLV/GLD pair, my preliminary research shows that SIL/GDX is a perfect pair to assess trends to trade SIL and GDX. In 2012, I selected the pair SIL/GDX because it seemed logical: both were miners and relatively similar in their price behavior but not identical. Now, armed with more background, it seems that SIL/GDX is indeed an excellent pair to derive trends. Nonetheless, I will likely unearth another good “pair” in the future. Preliminary research looks positive.

2. Was the outstanding outperformance just luck? Since SIL/GDX is a good pair to look for signals based on confirmation, I tested the same pair with a breakout system based on the following rules.

b) We buy an “n” days high provided there is confirmation (on the very same day or in the last 50 trading days). Input values from n=10 to n=130 with increments of 10 days.

c) We sell an “n” days low high provided there is confirmation (on the very same day or in the last 50 trading days). Input values from n=10 to n=130 with increments of 10 days. 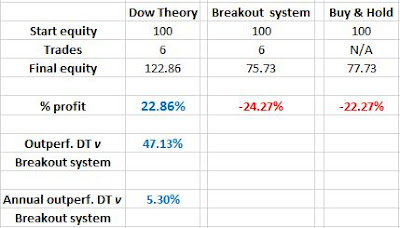 As an aside, most breakup values from 10 to 130 resulted in losses for both SIL and GDX, underscoring the light-years superiority of the Dow Theory versus typical trend following devices. Hence, it puzzles me that many “trend-following” hedge funds managing millions if not billions of dollars continue to base their trades on breakout systems. I am not criticizing “breakout” traders, as indeed, breakout systems have a slight edge (google “turtle trading” or “Richard Dennis”) but are much more vulnerable to dry spells than the Dow Theory.

3. Can we improve the gains made by the pair SIL/GDX traded on SIL and GDX? Yes, there are several ways. The most logical and Dow Theory-inspired solution is to seek trend confirmation from the pair SLV/GLD (multi-market confirmation). What would happen if we only bought and sold SIL and GDX when simultaneously the trend, as determined by applying the Dow Theory to SLV/GLD, is in gear with that of SIL/GDX? When analyzing GLD and SLV, we saw that seeking trend confirmation added value. Well, confirmation works. Instead of 6 round trades for our SIL/GDX system, we would have just had 4. However, our net profit over the period tested would have been 49.96% versus 22.16% for the SIL/GDX-only system. So, performance more than doubles. We must note that trades have been cut by 1/3 (4 instead of 6), implying that our accuracy has been boosted by demanding trend confirmation. We make more trading less.

4. We can also trade SILJ and GDXJ (the “juniors” ETFs) based on the trend determined by the pair SIL/GDX. The “juniors” tend to perform better in good times and worse in bad ones. By  mitigating the downside (bear markets) thanks to the trend appraised by applying the Dow Theory to SIL/GDX and demanding confirmation from the pair SLV/GLD, we would probably make more money. A 50/50% position in SILJ and GDXJ would have returned 84.24% over the period tested. Remember that over the same period, BAH lost -22.27%. Please mind that SILJ was not available at the beginning of our test, so we only had 3 trades for SILJ, whereas GDXJ had 4 trades.

Whether the trend determined by the pair SILJ/GDXJ would be even more accurate should definitely be tested. Another project for the future.

5. What if we traded SIL and GDX based on the trend determined by applying the Dow Theory to the pair SLV/GLD? We would have lost -2.17%, which remains much better than BAH. So, trends appraised from the pair SLV/GLD have some predicting power and outperform BAH. However, the pair SIL/GDX is more reliable.

6. As of this writing, the secular trend for SIL/GDX remains bearish, so unlike SLV and GLD, we cannot trade SIL and GDX on a secular trend filter. However, if we traded SIL and GDX by applying SLV/GLD secular filter, our performance would have been a respectable 45.01% with only two trades.

The spreadsheet below summarizes our findings:

7. And what about shorting? When a bear market signal is given, we close our long position and open a short position instead of going flat. I do not particularly appreciate shorting as the gain is limited (maximum 100%), and the loss is open-ended. We also have to pay shorting fees, dividends (as with GDX/SIL), and, when dealing with futures, we have to be careful with contango. I only go short when my time horizon is just a few days. However, I find it an excellent exercise to see what would have happened if we had shorted each time a bear market was signaled. After all, the only source of outperformance for any trend-following device (Dow Theory included) is the further decline that follows a Sell signal until the final bottom is made. If we had gone long and short, our final equity would have been 179.28, a gain of 79.28% versus 22.86% would have made by going only long. The maximum drawdown would have been -37.32%, slightly lesser than the -39.88% when going only long.
Can we further improve our results? Yes: If we use the secular trend filter based on SLV/GLD and take only short trades when the secular trend is bearish and long positions when the secular trend is bullish, we would have made an astounding 138.86% with a drawdown of only -6.38% (closed trade basis) with just four short and two long trades. Please mind that Buy and Hold netted out a loss of -22.77% over the same period.

Ten conclusions for this post and the previous one:

1. The Dow Theory produced outperformance versus BAH in both SLV/GLD and SIL/GDX. Drawdowns were cut by roughly one-half.

2. SIL/GDX, at least for the period tested, was an even more accurate “pair” to assess trends than SLV/GLD. I have solid reasons to believe that this is not an anomaly. The miners tend to lead the metals, and, more importantly, significant trends in the miners tend to imply that the trend is “for real” (meaning more likelihood of persistence).

4. It seems that the more volatile the asset, the better results are when applying the Dow Theory. We keep the upside while cutting short the downside.

5. If we traded a combination of all the Dow Theory alternatives, we would achieve more efficient use of capital, more trades, and, more likely, reduce the depth and time in drawdowns.  I have concrete ideas about Dow Theory-based portfolio construction, which I will share one day if time allows.

6. The issue of “pair” selection deserves further study. My preliminary research favors creating pairs that we would trade in only one asset (i.e., SLV would be best traded with a SLV/SIL pair, whereas SIL would be best traded with a SIL/GDX pair). By creating several good “pairs”, we can have more trades resulting in more diversification and more efficient use of capital (when one “pair” is not signaling a trend, the alternative “pair” may be signaling “Buy”).

7. I feel that Schannep’s Dow Theory, which is the very best Dow Theory “flavor” that can be found, could be adapted to other markets (i.e., precious metals and their miners) and could result in even better risked-adjusted performance. To this end, we should appraise trends based on three assets (i.e., GDX/SIL/GLD). Schannep's Dow Theory also includes Capitulation, betting on a trend reversal when prices have gone down too far too fast. The inclusion of Capitulation to our trading arsenal could likely add value but needs to be studied. Another project for the future.

8. What began as an experiment in 2012 has been vindicated. The Dow Theory is an excellent timing system (do you want to know why? Click here and here). It has nothing to do with traditional trend-following devices such as breakout systems and moving averages. More importantly, as Hamilton predicted in the nineteen twenties, it can be successfully applied to many markets; not only to US stock indexes.

9. With all the caveats about shorting, going short adds value. Those willing to increase their odds of succeeding when shorting might only take short trades when the secular trend is bearish.

10. One is not necessarily compelled to trade GLD, SLV, GDX, SIL, GDXJ, and SILJ strictly according to the primary bull and bear market signals. One can trade on a shorter time horizon (i.e., some kind of swing trading) or with tighter stops (leveraged hedge funds based on breakout systems that necessarily must have narrow stops) aligned with the primary trend as determined by the Dow Theory. I draw several actionable ideas for my own trading. And you?

Posted by The Dow Theorist at 9:13 PM