The previous post of this saga set out the premises of our study. This post and the next one are the most important that I have ever published on this blog. You won't find anywhere else the practical and profitable implications of the Dow Theory you are about to read.

Let’s first analyze our “live” trades as per the Dow Theory for the pair SLV/GLD.

The test spans from 08/22/2012 (first long taken) to 11/27/2020 (last long closed). On 4/21/2021, the Dow Theory signaled a new long position, which as of this writing, is a winner. However, we cannot include it in our study as the trade has not been closed and the final lows following the future sell have not been made. Including the open trade would bias the results in favor of the Dow Theory to the detriment of Buy and Hold (BAH).

I only assess the performance based on "Buy" (primary bull market) and "Sell" (primary bear market signals). Even though on 8/20/2020, I suggested some unloading of positions for precious metals near the top of the market and before the "Sell" signal was given (which  resulted in "cashing in" profits just before the downturn set in) I have not included such trade  in our comparison to BAH to our detriment. Only clear-cut 100% Buy and Sell signals have been considered.

Therefore, I feel that if there is a bias on my end, it is against the Dow Theory.

Here you have the highlights:

Total long trades: Seven round trades. The test spans. 9 years, one month and 7 days (from 6/28/2012, bear market bottom before the first Buy signal and 3/8/2021 bear bottom before the current Buy signal). Thus, each trade lasted slightly more than one year, which corresponds with the “typical” classical Dow Theory duration for the average trade, which is more than one year. On each Buy signal (primary bull market), we take a ½ position in each ETF (GLD and SLV).

Final capital Dow Theory (starting at 100): 99.81, which translates to an outperformance versus buy and hold of 6.06%, that is ca. 0.67% p.a. Please mind that the negative “gravitational” force against long positions has been powerful during the period tested, as BAH suffered a maximum decline of -51.81.

When comparing the drawdown of buy and hold to that of the Dow Theory, the latter reduced the maximum drawdown by 52.43%. This dramatic drawdown reduction confirms what I have repeatedly asserted: The primary source of the Dow Theory outperformance is loss avoidance. Hence, when markets (as US stock indices in the last 12 years) lack significant drawdowns, the Dow Theory will indeed underperform. However, “underperform” does not entail “losing”, just winning less.

Now some observations and suggestions for actual trading:

1. Please mind that my not yet finished research shows that the pair GLD/SLV was not the best combination to derive timing signals despite our outperformance. Thus, to prove my assertion, I tested the pair GLD/SLV on GLD (50% position) and SLV (50% position) with a breakup system. A breakup system is the trend following device that most resembles the Dow Theory (albeit it is like comparing a Ferrari and a Skoda). After all, the Dow Theory is based on the breakout of secondary reaction highs and lows. I tested a breakout system with the following rules.

b) We buy an “n” days high provided there is confirmation (on the very same day or in the last 50 trading days). Input values from n=10 to n=130 with increments of 10 days.

c) We sell an “n” days low high provided there is confirmation (on the very same day or in the last 50 trading days). Input values from n=10 to n=130 with increments of 10 days. 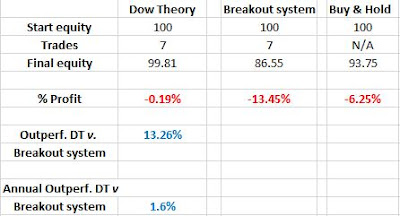 As you can see in the Table above, the breakout system had a loss of -13.45%, which is larger than that of BAH (-6.25%). All in all, when confronted with a difficult market and despite not using the most optimal combination of assets to derive signals, the Dow Theory was the system that performed best. Both in terms of performance and drawdown reduction.

2. Is there a better pair to derive signals for GLD and SLV? Yes, and by a long shot, at least during the period traded “live”, SIL/GDX gave better signals for SLV/GLD. In other words, true to the miners’ reputation of leading the metals, if we had just taken our trades on GLD and SLV when the pair GDX/SIL was flashing a Buy signal and exiting when GDX/SIL gave a Sell signal, we would have fared much better. I coded in TradeStation® the Dow Theory buy and sell signals derived from SIL/GDX applied to SLV and GLD (start capital for each ETF $ 50,000), and I got the following results: 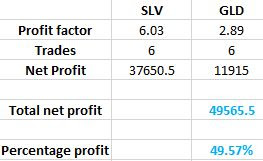 So we would have made a respectable +49.57% over the period tested, whereas BAH lost -6.25%. These astounding results lead us to conclude that common wisdom has it right (at least this time): gold and silver miners tend to lead precious metals (SIL/GDX' Buy signals leading SLV/GLD's occurred 4 on four trades out of 6). I plan to deepen my research on deriving signals for the precious metals from the pair SIL/GDX. An additional conclusion jumps to my mind: It seems that when the miners go bullish (or bearish), the signal is for real and has good odds of implying higher (lower) prices for the precious metals. On the other hand, signals derived from the precious metals themselves are less credible. It seems that it is easier to lift upwards or downwards the precious metals than its mining stocks. On the other hand, it seems that if people buy (or sell) the miners with conviction, the ensuing trend is genuine.

3. We are not obliged to take all trades. What would have happened if we just had taken the Buy and Sell signals derived from the pair SLV/GLD when the secular trend appraised with the same pair was bullish? As a reminder, I assess the “secular” trend by applying the Dow Theory to weekly bars. More on the secular trend and how to use it here.

Well, if we only had taken “Buy” signals when the secular trend was bullish too, we would have had just 3 trades, and our final equity would have been 118.44 that is an outperformance versus BAH of ca. 2.71% p.a.

4. Confirmation matters (multi-market confirmation). If we had only taken trades when the pair SLV/GLD signaled a primary bull market but SIL/GDX remained in a bearish mode, we would have made a negative return of -4.46% for the period tested, which remains slightly better than BAH but worse than honoring all trades. So it seems it is not a good idea to go long SLV and GLD when its pair SLV/GLD turns bullish, but SIL/GDX remains in a bear market and is not confirming. This test highlights the powerful influence of the miners on the precious metals’ trends.

5. Finally, if we had only taken trades when both SIL/GDX and SLV/GLD were in a primary bull market (SIL/GDX confirming), our performance would have been 17.67% for the period tested and an outperformance versus BAH of 23.92% during the period evaluated.

Here you have a spreadsheet summarizing all the relevant information:

As you can see, even the plain vanilla version of the Dow Theory (take a 50/50% position on GLD and SLV according to the trend determined by SLV/GLD) managed to beat BAH. A standard breakout system fared much worse. More sophisticated applications of the Dow Theory (using secular trend filter, seeking confirmation from the miners, etc.) boosted the outperformance. Any wonder why I am an ardent believer in the Dow Theory? It works. Even when confronted with a lousy market (as it was SLV and GLD during the period examined), we can manage to be profitable when wisely used.

From this study, I draw actionable conclusions for my own trading (with a portfolio perspective). Reader do your homework.

2. The same pair SLV/GLD tested as breakup system fared much worse than the Dow Theory.

4. Applying a secular trend filter to weed out dubious Buy signals boosted the outperformance versus BAH to almost 3% p.a.

5. Taking trades derived from the pair SLV/GLD when SIL/GDX remains in a bearish trend, is a ticket to the almshouse (unless the secular trend for SLV/GLD is bullish). At least for the period tested, it seems the miners should be confirming SLV/GLD.

6. A trader might be well advised to using a combination of the strategies described above. It is not necessary to bet the farm on any one concept when all of them are sound.

And what about the performance of the precious metals miners SIL & GDX? Wait for the next post of this saga. Spoiler alert: SIL and GDX' performance is Dow Theory with steroids.