Dow Theory Update for August 9: I feel SLV and GLD are not in a primary bull market yet

The primary trend is bullish since November 21st, 2016, as explained here and here.

The primary trend was reconfirmed on July 3rd, 2017 as was explained here

The Transports have been diverging from the SPY and the Industrials by declining whereas the other two indices continue making higher highs. Such a sustained divergence might be indicative of an impending secondary reaction.

Here you have an updated chart. The chart in the middle displays the Transports which are clearly diverging.

The primary trend was declared bearish on July 7th, 2017, as explained here and here

The current rally qualifies as a secondary reaction against the primary bear market. Both GLD and SLV rallied for 16 trading days, which is more than 3 weeks. So the time requirement, any way you measure it (Schannep’s Dow Theory or “Rhea/Classical” one) has been fulfilled.

On the other hand, as to the extent requirement the confirmed rally has retraced on a confirmed basis more than 1/3 of the previous primary bear market swing. More specifically, SLV has retraced ca. 40% of the previous bear market swing, whereas GLD has retraced ca. 65%. Given such a solid retracement on a confirmed basis I don’t need to use volatility adjustments in order to declare the existence of a secondary reaction. The secondary reaction is displayed with blue rectangles on the charts below. The retracements are shown by the thin horizontal lines with numbers attached to them (0.00%, 23.60%, 38.20%, etc.)

The red rectangles highlight the pullback which followed the secondary reaction closing highs of 7/31/2017. While in technical analysis everything is debatable, I feel that the depth of the pullback is not ample enough to set SLV and GDX for a primary bull market. As you  can see on the spreadsheet below, GLD has merely declined -1.02%, whereas SLV has declined a meager -3.58%. According to the Dow Theory (when applied to US indices) a movement lesser than is to be neglected. However, we also know that the pullback setting up stocks (or precious metals) for a primary bull market signal need not be confirmed. In other words, since SLV has declined more than 3% and GLD, while declining less than 3% has not diverged from SLV, one might be tempted to say that the setup has been completed.

So let’s take a look at the spreadsheet below: 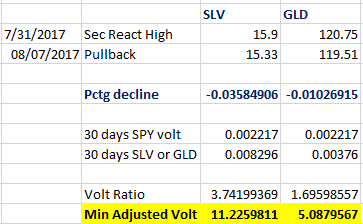 The SPY’s 30 days average volatility (close-to-close percentage change) has been 0.2217%. SLV’s 30 days average volatility has been 0.8296%. So SLV has been almost 4 times more volatile than the SPY during the last 30 days. Thus, if we multiply the minimum movement of 3% required for any movement to be meaningful by 3.74 (the volatility ratio) we obtain a minimum adjusted volatility of 11.22%. While I might be willing to settle with a somewhat lower adjusted volatility, -3.58% is too far away from 11.22%. Hence, my judgment call, is to consider the pullback as not relevant, and hence I cannot declare the secondary reaction as finished. Today’s higher highs, are not a primary bull market signal (as there was no setup), but, rather, higher highs made by the ongoing secondary reaction.

I insist, everything is debatable. However, this is the way I see things. Furthermore, in such not so clear-cut cases, is good to remember that (a) The primary trend for GDX and SIL remains bearish and no primary bull market signal is to be expected in the next few days; (b) the trend for SLV and GLD when appraised with weekly bars by using the Dow Theory is solidly bearish.

All in all, the primary trend remains bearish, whereas the secondary trend is bullish (secondary reaction against the primary bull market).

The primary trend is bearish, as was explained here and here.

The secondary trend is bullish as explained here

As was explained here, SIL and GDX have set up for a primary bull market signal.

Days pass by and nothing happens. Well, this is normal. Patience.

Here you have an updated chart, so that you check the lack of action by yourself.

Posted by The Dow Theorist at 4:25 PM