Dow Theory Special Issue: Hamilton’s insight that the Dow Theory may be applied to many markets seems to be right (III)

In the previous two posts of this “Hamilton” saga (here and here) I analyzed what would have happened if I had taken either longs or shorts as per the primary bull and bear market signals given by the Dow Theory. I call it “Hamilton” saga, because 100 years ago Hamilton predicted that the Dow Theory could be successfully applied to any organized market. Not to just US stock indices. As I have written previously Hamilton was right. I am seeing his insight being proven right with markets such as SIL/GDX, SLV/GLD, TLT/IEF, and a long etc. Hopefully in the next few years (yes, this is a time consuming endeavor) I’ll be able to prove beyond any shade of doubt the universal applicability of the Dow Theory. Not just to many markets but also to many time frames which lends itself to a Dow Theory portfolio which, I contend, would outperform (at least as far as drawdown reduction in length and extent is concerned) most trend following hedge funds.

In this post, we will take a look at what would have happened to the pair USO (crude oil) and XLE (oil stocks) ETFs if we had applied the Dow Theory and would have been long and short as per the signals given.

In my model I start with a notional 100 and I compound according to the result of the trades taken.

Here are the highlights of being both short and long:

5.      Final capital Dow Theory (starting at 100): +165.19. Hence, by combining both long and shorts we obtain a higher absolute performance than by just having either longs (final capital of just 105.38) or shorts (final capital of 156.76). It is worth remembering that both longs and shorts when taken separately handsomely outperformed buy and hold. So the superiority of the Dow Theory is manifest either way one applies it. 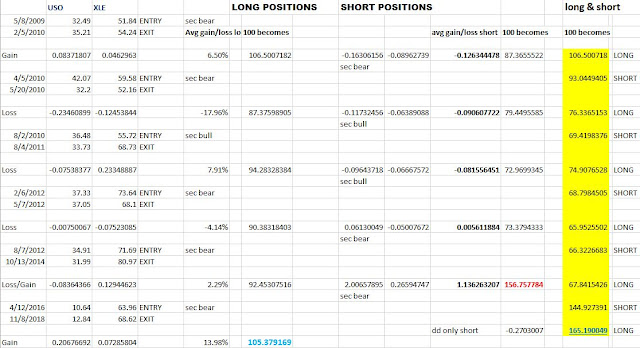 Special mention deserve the issue of drawdowns. We see that the maximum drawdown when taking both longs and short (-38.07) is slightly higher than the drawdown when just taking either just longs (-17.95%) or shorts (-27.03%). This is due to two consecutive losing trades. First, one losing short followed by a losing long. In other words, it was a double whipsaw. The short was covered (and went long) at a higher price and that long was sold at a lower price. On the other hand, when just testing either the long or the short side the distribution of winning and losing trades resulted in a more mitigated drawdown. Hence, the slightly higher drawdown is not caused by a “worse” trading system but just a statistical fluke (clustered losing trades). Moreover, I am of the opinion that the more trades one generates on a given unit of time (long and shorts results in more trades per unit of time –i.e. 1 year- than just trading the long or the short side), the higher the probability of getting out of drawdowns.

Of course, a drawdown of -38.07% which lasted ca. 6 years is annoying even though it was of much shorter duration than those we usually see in “buy and hold” (or even many trend following hedge funds which as of this writing are undergoing a very dry and long spell, not because of a flaw in design but because the market is currently unmerciful to non Dow Theory-breakout-based trend following).

From such a drawdown we can infer the following conclusions:

·        One day US stock markets will not be so merciful to investors. Noise will prevail and higher (and likely longer) drawdowns than those previously seen in the last +120 years could be in store for us. Higher drawdowns do not necessarily stem from one big losing trade but often, as with this test, is the result of various consecutive losing trades (death by a thousand cuts). If we saw one day in the future a -35% drawdown when applying the Dow Theory to US stock indices, it wouldn’t mean that the Dow Theory is broken. It would merely mean, as traders are prone to saying, that “your worst drawdown is always ahead”. The only way to escape such a fate is by allocating part of your capital to other markets and trade them properly (of course).

·        The only way to reduce the “extent” of the drawdown is by allocating less capital to any given pair of markets. Of late I insist on building a Dow Theory portfolio which implies diversifying one’s capital among several markets (interest rates, stock indices, precious metals, etc.) and time frames (alternative definitions of secondary reaction based on more or less days). In this specific example, if “energy” would have merely represented 20% (and this is already too much for just “energy”) of one’s Dow Theory portfolio, our drawdown would have merely represented -7.614% of our total equity.

·        The only way to reduce the “length” (time) of a drawdown is by generating more trades on any given unit of time. Since the Dow Theory has a positive expectancy (that is that in the long run we win more than lose), the more trades we generate, the more likely winners will come to our help to get us out of the drawdown. If we traded “secular” (i.e. weekly bars) and we just got 1 trade every 4 years, then one losing trade, even if one of modest proportions, would result at least in a 4 years drawdown. Not because the system is defective but because of scarcity of trades. As I have written in the past, the issue is to generate more trades without sacrificing the quality thereof and not falling prey to overtrading. One way to accomplish this is by diversifying across markets. As an aside, hence the importance of Schannep’s Capitulation and timing indicators. They just provide us with more good quality trades.

All in all combining the long and short side may be in some instances be a good idea. It help us weather adverse market conditions (when the secular trend is bearish longs, as with this test are not likely to perform well, even though we beat the pants off buy and hold; conversely when the secular trend is bullish shorts are not likely to perform well). We have to bear in mind (as this blog has shown for more than 7 years and this test highlights) that in real time nobody knows the future and that we have to go with the flow (the trend) and, more importantly, that even when faced with headwind the Dow Theory manages to greatly outperform buy and hold (both in absolute returns and risk adjusted profile). When we studied the “long side” of the pair USO/XLE we saw that buy and hold was a clear loser. However, even when confronted with downward pressure, the Dow Theory managed to make a small profit with a small drawdown. By this I mean that we cannot know the future and even if we happen to be on the wrong side of one trade (i.e. long when the market refuses to stage solid rallies) the Dow Theory will manage to contain losses or even make a modest gain.

The short side is not to be neglected (specially is one trades with futures). Andreas Clenow, an actual trader, and author of, in my opinion, the best book on futures trading, "Following the Trend" makes a very conclusive case concerning the use of shorts in a trend following futures based portfolio. While he acknowledges that the overall contribution of the short side to overall performance is not that big (2.5% p.a. in his breakout model) he proves that the overall risk profile and the efficient frontier is greatly improved by including shorts. While I may be proven wrong, after having in real life applied the Dow Theory to many markets for more than 7 years, I feel that shorts taken under the Dow Theory may yield more than 2.5% (as with the current test, and SIL/GDX, SLV/GLD) which is no surprise as I have written in the past that the Dow Theory is more accurate than breakout trend following systems.

1.      Trades cut by ca. half. Please mind that I advocate for generating many trades in order to reduce the length of drawdowns. But I always qualify and say “good quality” trades. If the secular trend filter results in more profits and less drawdowns with less trades, I welcome it without reservations.

2.      Lower drawdown in both longs, shorts and combined long/short.

3.      Higher returns in both longs, shorts and combined long and short.

4.      By being out of the market for substantial periods of time, capital would have been freed to be used in other markets, which would have contributed to further increase performance.

The details to be given on the next post of this saga.

Till then,
Sincerely,
One Dow Theorist