Dow Theory special issue: Why it is a bad idea to apply the Dow Theory to monthly highs and the vital importance of confirmation


Secondary reactions and not monthly highs are the valid breakup points

In a previous post I said I was going to test a breakout system based on taking 1 month high in order to see if the Dow Theory could be (mis)interpreted as implying that the joint penetration of 1 month highs is a valid form of declaring a new primary bull market. Well, I was so excited by the idea that I performed such a test.

This is a long post loaded with very important and actionable information. Please take your time to digest it if you are really serious about mastering the Dow Theory.

The implications of this test, as you will read, are momentous. It disproves the validity of taking monthly highs as a valid breakout point (even if confirmed) under the Dow Theory. Furthermore, and even more importantly, it constitutes very strong evidence of the principle of confirmation which works not only with the Dow Theory but also when applied to breakout systems. In other words, confirmation works, it adds value and it is justly a fundamental tenet of the Dow Theory.

To perform my test I programed a very simple strategy in TradeStation® (EasyLanguage). Here you have the code:

As you can see it is simple. It is based on the close (ignores, as per the Dow Theory, intraday highs and lows) and it calculated the highest closed of the last “n” days for both Industrials (“c”) and the Transports (c data2). The only parameter is the lookback period to calculate the “n” days breakout, which is a so called “input” in TradeStation®, such an input has been named “DIAS” (Days, in Spanish).

Thus, a buy signal will be given (and the buy will be made at the close) if the c is higher than the highest closing high of the last “n” days. Both indices must fulfill this condition (principle of confirmation).

A sell signal is given when on a confirmed basis the same “n” days lowest low is jointly violated.

A fictional capital of USD 100,000 was traded on each trade (so no capitalization).

Maybe in the future I will test a more elaborated version of this breakout system (basically, confirmation need not occur the very same day). However, this test suffices to illustrate two things: Taking monthly highs is not a good idea and confirmation is vital.

The test spans exactly 20 years. So it began by April 1999 and finished on April 13rd, 2019. I deliberately avoided the glorious nineties (torrid secular bull market) not to bias the results. I feel that the last 20 years is more representative of reality. Two big bear markets (2000-2002, 2008-2009) and also some good bull runs. Thus, 20 years is more than enough to give us an idea.

The actual trades were taken on the Industrials.

First of all I conducted a test were the parameter DIAS (days) was calculated between 2 days and 70 days. In breakout systems 2 days would be extremely short term and 70 days would be quite long term. Here you have the results of this run. I demanded confirmation, so both the Industrials and the Transports had to be above the last “n” days highest high:

Observations to the test:

1)     The most reliable measure of efficiency is the profit factor (not the average trade, because it can grow larger with a longer lookback period but at the same time less time efficient, as profit divided per time might diminish). You can find the profit factor (PF) at the right column of the chart. As you can see the longer the lookback period the better the profit factor. As from 40 days, the system delivers a very decent PF. At 70 days the confirmed breakout systems sports a very decent PF of 3.95 (which means profits are 3.95 larger than losses). We also see that lookback periods below 10 days result in losses, which means in short time frames noise prevails.

4)     The number of trades decreases as we increase the lookback period.
All in all, a breakout system (on a confirmed basis) applied to the Industrials and Transports taking the signals on the Industrials seems to work well.

As you can see the PF seriously deteriorates. The pure breakout system, absent confirmation, becomes basically untradeable. Once you factor in slippage and commissions you are likely to get killed. Furthermore, drawdowns increase. The average trade is much smaller across all timeframes as well. The number of profitable trades also plummets.

Therefore, you see the importance of the principle of confirmation. Without it a breakout system is only marginally profitable. Add confirmation and you have a pretty decent trading system.

Now let’s zero in trading both using a lookback period of 22 days (1 trading month) to see whether the breaking up of 1 months closing highs has lots of follow through (something which I didn’t believe as I wrote in my last post) so that there is a good chance to make profits.

First we run a test of a 22 days breakout system on a confirmed basis. Here you have the results: 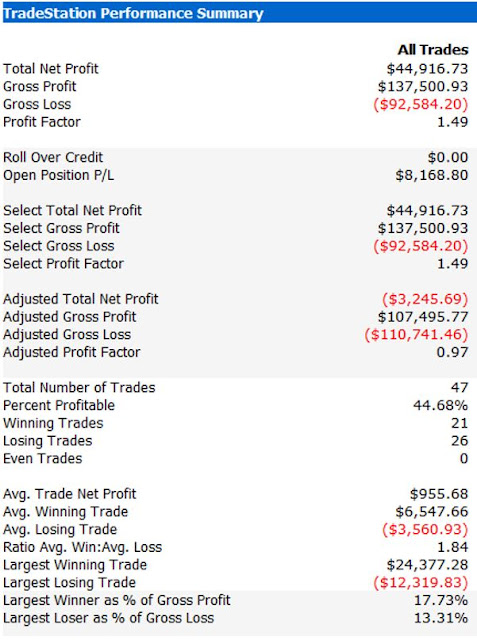 As you can see the PF of 1.49 is not, to say the least, outstanding. The number of profitable trades lies well below 50% and, more importantly, winners are not able to double losers. A total of 47 trades were taken in that period, which is more than 2 trades per year. 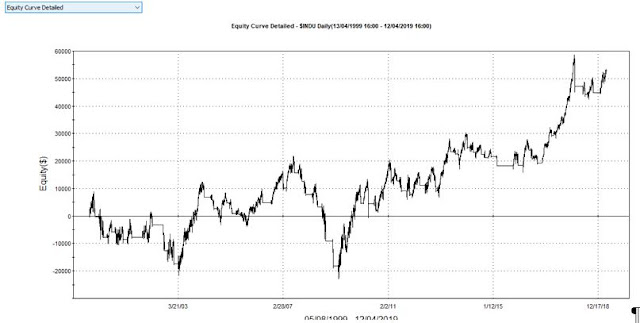 We can observe the following:

1)     Drawdowns are hair curling. Both in time and extent. And this is in spite of having many trades (the more trades you have the shorter the drawdown provided you have a positive PF) 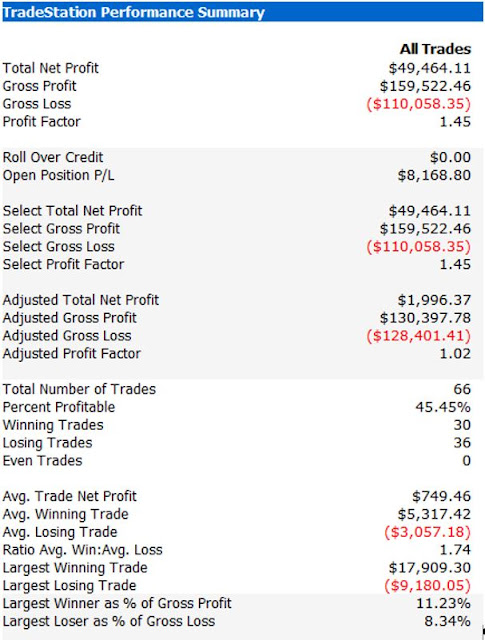 We observe that the PF is slightly lower than the PF when we required confirmation. More importantly, we see that on shorter time frames (22 trading days) the principle of confirmation is less important. 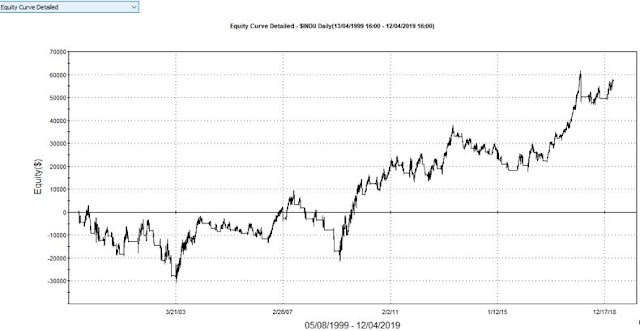 Drawdowns are also quite bad when no confirmation is required. In 2003 there was a drawdown of ca. -30% and in 2009 there was a drawdown of ca. -30% too (both peak to trough). So in terms of drawdown similar results to those obtained when using confirmation (which proves that in short time frames it does not add so much value). However, we observe, a neater, less ragged equity curve which is due to the existence of more trades.

Once we have proved that it is not a good idea to use a 22 days breakout system to trade US indices, let’s see what happens if the take a longer time frame of 66 days (3 trading months).

Here you have the results when we require confirmation: 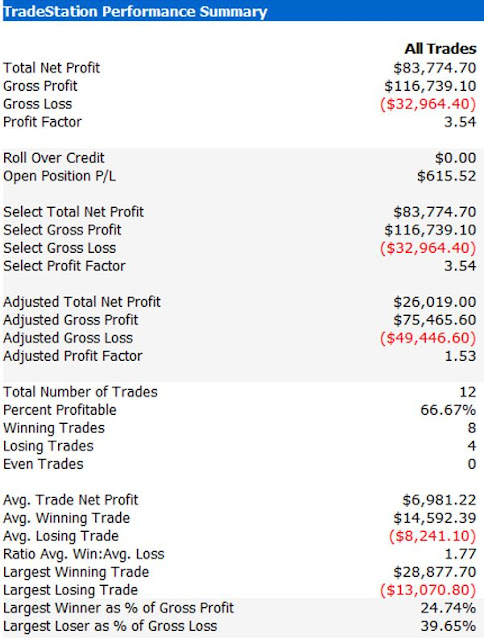 1)     Trades have been diminished dramatically. Just 12 trades in 20 years, which brings us to an average trade duration similar to that of the Dow Theory.

4)     The number of profitable trades at 66.67 begins to resemble that of the Dow Theory. 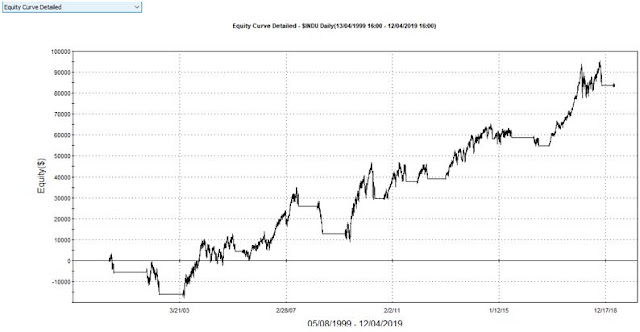 We observe that drawdowns are smaller. In the 2002-2002 bear market the drawdown was ca. -15%. We also observe that lots of the time we were out of the market (flat lines). In the 2008-2009 bear market while not putting the system in the red, there was a peak to trough drawdown of ca. -30%. The time spent in drawdowns was also noticeable smaller (although in real life, as with all trend following systems living through such drawdowns can test one’s patience) if we take into account that only 12 trades were generated (the lesser the number of trades the more likely, other thing being equal, that drawdowns may last longer).

However, while a much better way to trade, this 66-days breakout confirmed system, is no match for the Dow Theory (even the Rhea/classical one). Go to this link and you will understand why.

As an appetizer, please be informed that in classical Dow Theory the average winning trade makes an astounding 45%. While it is true that if we just take the last 20 years, this average will definitely be lower, it is certainly higher than the 14.5% made under the breakout confirmed system (ca. 14,500 $ average winning trade divided per 100,000 capital committed)

Furthermore, the classical Dow Theory has had a deepest drawdown of -20% (Schannep's Dow theory just ca. -10%), which is less than the drawdowns made by the confirmed breakout system.

Finally, for the breakup system to start properly working we need a generous lookback period (starting from 50 trading days). On the other hand, the Dow Theory, by mixing time (days of rally) and extent to form secondary reactions is much more reactive. Sometimes with just 15 trading days the Dow Theory will have established a valid breakup point, sometimes, depending on market conditions the setting up of a valid pivot point will demand more time (longer secondary reaction). Hence, under the Dow Theory our valid pivot points (secondary reaction highs for primary bull market signals) do not depend on a fixed parameter (number of days) and depending of the very development of price action we will have longer or shorter (in number of days) pivot points. I wrote about the advantages of the Dow Theory because it is not parametric here.

All in all, while the 3 months confirmed breakout system is certainly good, it is no match for the classical Dow Theory. And of course, since Schannep’s Dow Theory sports even better performance figures with lower drawdowns (ca. -10%), it does not make sense to trade this kind of breakout system. It would only make sense as a deliberate attempt to diversify. Sometimes, we traders, settle with inferior (but profitable) systems just in order to generate more trades (less time in drawdown) and diversify (when, i.e. the Dow Theory may have a couple of bad trades, the breakout system may be more in gear with the market). The net result of mixing a superior system with one inferior but profitable, may result (no guarantee, though, if there is big correlation) in slightly lower performance (which I can accept as a token for an insurance policy) and lower and shorter drawdowns.

I don't include the details of the results of testing a 66 days breakout system without confirmation (you can see the abridged figures in the run displayed above) to keep this post relatively short. If suffices to say that without confirmation the 66 days breakout system becomes almost a loser system (factoring in slippage and commissions it certainly becomes a loser system).

The take away is as follows:

·        The breaking up of one month highs is not the best way to trade according to the Dow Theory. Arbitrarily taking one month highs as a breakup point leads to poor investment results.

·        Even we the increase the lookback period and trade with a three months confirmed breakup the resulting trades, while much better, pale by comparison with those obtained when the Dow Theory or Schannep's is properly applied.

·        Confirmation when trading breakout systems becomes more important the longer the timeframe, which implies that one of the tenets of the Dow Theory (confirmation) is and remains vital. Absent confirmation performance degrades.

·        The proper application of the Dow Theory requires considering the highs of secondary reactions as the points to be jointly broken up. Such highs maybe quite near in time or much distant in time depending on the features of each particular secondary reaction and price structure (steep decline, almost flat decline) before the onset of the secondary reaction. This built-in flexibility or self-adjusting nature coupled with the principle of confirmation makes the Dow Theory superior to any other trend following device (breakout system or moving averages). A specific post proved the overwhelming superiority of the Dow Theory versus moving averages.