Trends unchanged for US stocks

Today is a post that took a good deal of analysis and time to write. Take your time to fully digest it.

A primary bear market for US stocks was signaled on August 14th, 2019 as explained here.

A secondary reaction against the primary bear market was signaled on August 30, as explained here.

From 09/19/2019 US stock indices have been hesitant neither the secondary reaction closing highs nor the last lows of the primary bear market have been broken. All in all, we have to wait, and in the meantime the primary trend as per Schannep’s Dow Theory remains bearish.

As to the Rhea/Classical Dow Theory there are no changes. The primary trend remains bullish (as explained here)

The primary trend is bullish since 12/24/2018 as explained here. No changes. We finally got a secondary reaction on 4/16/2019 when GLD violated its 03/07/2019 closing lows (and confirmed SLV which had done so some days ago). More about the entrails of such a secondary reaction here and here.

On 09/04/2019 SLV and GLD made its last recorded primary bull market closing highs. From that date both ETFs declined for 18 trading days until 09/30/2019. Since 18 trading days clearly exceeds two or three weeks, the time requirement for a secondary reaction was met.

And what about the extent requirement? Well, things are not so clear-cut. As to SLV it has retraced 50% of the previous bull market swing. Please mind that a bull market swing is not the same as the whole primary bull market. Each “swing” is the price advance that starts at the bottom of each secondary reaction which is finally resolved in favor of the primary bullish trend. In our case, our “swing” got started on 05/28/2019 (SLV) and 04/23/2019 (GLD). GLD has not managed to retrace 1/3 of the previous swing. My Fibonacci calculator (courtesy of TradeStation®) tells me that the retracement has been of 29.80%, thus falling short of 33%. As per the classical Dow Theory, we are supposed to require a retracement of at least 1/3 on a confirmed basis to declare the extent requirement for a secondary reaction as fulfilled. However, we are in a borderline situation.

As you well know, as per Schannep’s Dow Theory, we don’t require retracement but (for US stock indices) a minimum move of at least 3% on a confirmed basis. As you also know, when I apply the tenets of Schannep’s Dow Theory outside the realm of stocks, I perform volatility adjustments; namely, if, i.e. gold’s volatility doubles that of the S&P 500 over a set period of time (i.e. 30, 100 days), I will demand 3% (the minimum movement for stocks) multiplied per 2. On 09/30/2019 date of the putative secondary reaction closing lows the 100 day volatility adjusted minimum movement for GLD was 3.38%. On the other hand, the total decline from the 09/04/2019 closing highs to the 09/30/2019 closing lows was -5.31%. All in all, the extent requirement, if we are to apply the Schannep’s rules to GLD would have been also fulfilled. Furthermore, we have to bear in mind that the time requirement was amply met. The more I practice the Dow Theory, the more I begin to understand Rhea’s cryptic statements as to toying with extent and time (page 61 of “The Dow Theory” Fraser Edition 1993). My gut feeling tentatively suggests me the following rule of thumb:

The more “time” I have, the less strict I should be with the “extent” requirement and vice versa.

I am not saying that If I have plenty of “time” (i.e. 5 weeks of declining prices) I can do away with the extent requirement (although there is one trader that suggested doing so). However, I feel that the more established has been a pullback, the lesser strict I can be when gauging the extent requirement. In our case, 18 trading days is a reasonably sufficient length of declining prices, and hence, I can be somewhat flexible as to the extent requirement. In our case, SLV has retraced more than 50% of the previous bull swing, which, by the way, tends to reaffirm that we are dealing with more than a subtle decline. GLD has retraced ca. 29.8% which is not so far from 1/3 (and hence confirming). If we evaluate GLD’s under the prism of volatility (as Schannep does with stocks) the pullback for GLD has exceeded the minimum volatility-adjusted threshold.

From the secondary reaction closing lows of 09/30/2019, SLV rallied until 10/08/2019. GLD did so until 10/09/2019. Hence, the time requirement (at least two bars) to set up SLV and GLD for a primary bear market was also fulfilled (small blue rectangles on the right side of the charts below). Now we have to measure the extent of such a rally. If at least one ETF has rallied more than the minimum volatility-adjusted movement, we will declare the existence of the setup.

As shown in the spreadsheet below, SLV has rallied 4.33% whereas the minimum volatility-adjusted movement (at date 10/08/2019, date of the rally high) amounts to 5.28%. Hence, SLV has not fulfilled the minimum movement requirement. 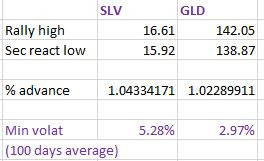 And what about GLD? GLD has rallied a meager 2.28% which is also below the minimum volatility-adjusted movement (at date 10/09/2019, date of the rally high) amounts to 2.97 %. Hence, GLD has not fulfilled the minimum movement requirement either.

Here you have an updated chart

On 09/04/2019 SIL and GDX made its last recorded primary bull market closing highs. From that date both ETFs declined for 18 trading days until 09/30/2019. Since 18 trading days clearly exceeds two or three weeks, the time requirement for a secondary reaction was met.

As to the rally that followed the secondary reaction lows of 09/30/2019, neither ETF has fulfilled the minimum volatility-adjusted movement, as you can see on the spreadsheet below. 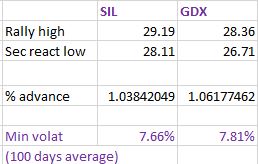 Hence, no setup for a primary bear market has been completed.

Here you have an updated chart