The primary trend was signaled as bearish on 1/5/22, as I explained here.

As I explained here, the secondary trend was signaled as bullish (secondary reaction) on 5/25/22. A pullback set up both ETFs for a potential primary bull signal, as explained here. However, the pullback continued lower, and the 5/6/22 closing lows were breached. On 6/10/22, IEF broke downside its 5/6/22 bear market lows. On 6/13/22, TLT provided confirmation. Such a confirmation implies:

1. The setup for a potential Buy signal has been canceled.

2. The secondary (bullish) reaction against the bear market has been terminated.

3. The primary bear market has been reconfirmed. So, the odds favor lower prices.

4. The primary and secondary trends are bearish.

The Table below summarizes the key events from the previous bear market lows (Step 1) to the current breakdown (Step 4):

Below are the updated charts: 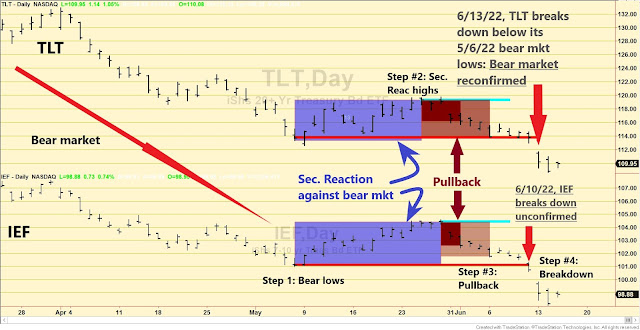 In my 12/3/21 post, I wrote that the rallies that had until then developed did not qualify as a secondary reaction. The situation has not changed, as the current rally has not fulfilled the time requirement. Newer lower lows on 6/10/22 by IEF and 6/13/22 by TLT increases the probability for lower prices.

Posted by The Dow Theorist at 1:01 PM