As I wrote here, the secondary trend for precious metals had changed on September 23rd, 2020. Now it is bearish (secondary reaction against the primary bull market).

In this post, I provided a thorough explanation concerning the rationale behind my use of two alternative definitions in order to appraise secondary reactions.

Please mind that I am writing before the close of October 8th, 2020. So things might change after the close. Readers beware.

One legitimate interpretation of the appraisal of secondary reactions under the Dow Theory let us conclude that the primary trend turned bullish on April 9th, 2020, as explained here.

During July and the first days of August, both ETFs made higher highs so both the primary and secondary trend was bullish.

On August 5th, 2020, both SIL and GDX made their last recorded highs. From that day, prices dropped for 34 trading daysuntil the final bottom made on September 23rd, 2020. So the time requirement for a secondary reaction was fulfilled. Please mind that even though we are “flexible” under this heading and may appraise a secondary reaction lasting less than three weeks, I could not discern any secondary reaction until 09/23/2020. If you look at the charts, the first low that followed the highs of 08/05/2020 was made on 08/11/2020, which is equivalent to only 4 days of decline. Four days is too little time to declare a secondary reaction.

Now let’s take a look at the extent requirement that must also be met for a secondary reaction to exist. Let’s observe the spreadsheet below: 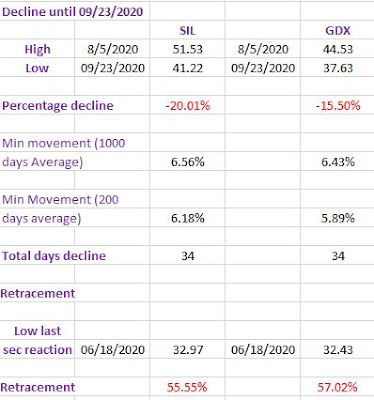 Percentage-wise SIL declined -20.01%. GDX -15.50%. When applying the Dow Theory to US stock indices, we require a minimum 3% movement for a swing to be taken into account. Swings not reaching 3% are to be discarded (too little movement). When we venture outside of the realm of US stock indices, I feel we should consider the different volatility of the financial assets concerned. This is why I perform a volatility adjustment. I compare the daily percentage change of the asset in question to that of the SPY. If, for example, SIL had a double daily average percentage change than the SPY, then the minimum volatility requirement for SLV would be 2 x 3% = 6%.

Since volatility changes, I performed 200 days and 1000 days average calculations. As you can see in the spreadsheet above, the pullback underwent by both SIL and GDX clearly exceeds the minimum volatility-adjusted movement (around 6.20% for SIL and 5.89% for GLD when one takes a 200 days moving average of daily price changes). Being influenced by Schannep’s Dow Theory, which does not use retracements but absolute percentage swings, I’d say that given the magnitude of the pullback, I’ll consider the extent requirement fulfilled.

The icing on the cake, which confirms beyond any shade of doubt that there is a secondary reaction is the existence of a confirmed retracement of the previous bull market swing (from the lows of the last secondary reaction -06/18/20- to the highs of 08/05/20) exceeding 1/3 on both ETF (55.55% for SIL and 57.02% for GDX).

By the way, based strictly on the Dow Theory, I alerted about the enhanced likelihood of a secondary reaction by the end of July 2020. Several warning signs piled up: Excessive volume and, more importantly, several divergences between gold and silver. You may read the full explanation here.).

Off the September 23rd closing lows, SIL and GDX rallied for 8 trading days. SIL rallied 8.13%, which is more than the minimum volatility-adjusted movement (MVAM). GDX rallied 5.16% which lies slightly below its MVAM. Please mind that, as I have repeatedly written in the past, the final rally (pullback) that sets up the ETFs for a primary bear (bull) market signal need not be confirmed in extent, just in direction. However, confirmation never hurts. Rhea nuanced the issue of confirmation clearly in his book “The Story of the Averages”. The spreadsheet below gives you the relevant figures:

The validity of the current primary bear market setup seems to be further strengthened because I discern a “line” (narrow range) on both the SIL and GDX chart. I saw a similar formation in US bonds (see here). Many similar patterns are being formed these days in several markets.

Rhea wrote that a “line” is made when both the Dow Industrials and Transports move within a range of approximately five percent for at least two weeks. Given that the daily volatility of SIL and GDX approximately doubles that of the SPY values close to 10% would be acceptable for them. The spreadsheet below gives you the details of the line:

Here you have the charts. The red oranges display the “line”. Please mind that on both charts, the line was broken downside with increasing volume. Not a very good omen (at least for the coming days). Furthermore, during the rally that followed the September 23rd lows volume has been subdued.

I know there is a lot of bullishness concerning precious metals and miners. There is talk of inflation, of printing money to infinity, etc. However, we are technical traders. If the September 23rd lows are jointly broken down, a primary bear market will be signaled, no questions asked.

As a reminder, this is the current state of the unrealized profits:

For those wishing to adhere to a more strict interpretation when determining secondary reactions, the primary trend would have remained bearish (bearish signal given on March 11th, 2020, as explained here) until 05/15/2020. On 05/15/2020 SIL finally broke up its last recorded primary bull market closing highs of 12/26/2019, and a primary bull market was signaled. GDX had done so on 4/22/2020. Thus, even under the most restrictive interpretation of the Dow Theory, the primary trend was signaled as bullish on 05/15/2020.

No secondary reaction has been signaled since the primary bull market signal of 05/15/2020.

On August 5th, 2020, both SIL and GDX made their last recorded highs. From that day, prices dropped until the final bottom made on September 23rd, 2020, for 34 trading days. So the extent requirement for a secondary reaction was fulfilled.

As to the extent requirement the spreadsheet below tells you the whole story: 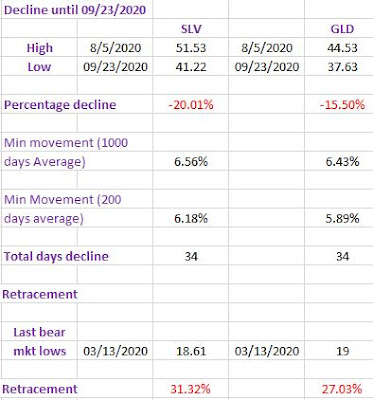 Percentage-wise, both ETFs have declined more than the minimum volatility adjusted movement. However, under the “strict” (and in my opinion somewhat misguided) interpretation of the Dow Theory, we need have a confirmed 1/3 retracement of the previous bull swing.

So the extent requirement has not been met. If no secondary reaction has been declared, we are still far from completing a primary bear market signal setup.

Here you have an updated chart. The grey rectangles display the current pullback. Since it is not a secondary reaction (under this “strict” interpretation) is has not been given the orange color of secondary reactions.