Trends for Gold and Silver, US stocks and US interest rates unchanged

Recent developments are contributing to further cementing my faith in trend following (when properly applied), and, in particular, the Dow Theory, and to remain impervious to many siren’s songs. I’ll give you one example.

Last February 26th, I was perusing an economy Spanish newspaper. You’ll remember that by February 26th US world indices had already been inflicted a good deal of pain. An article highlighted that after closing at 9281.3 and having declined ca. 10% from the market top, the Spanish IBEX 35 (Index that comprises the top 35 listed Spanish companies) was a good buy because it yielded ca. 4.5%. The rationale of the article was that the index was relatively “cheap” given the high dividend yield so it could be a good buy. Even I felt the tinkling of greed and thought that maybe, just maybe, the journalist could be right. However, temptation just lasted some seconds, as immediately the following thoughts came to my mind:

a)     Don’t catch a falling knife (unless you have the time-tested capitulation, and even then do it piecemeal).

b)     Trying to catch a good dividend yield may result in sizeable capital losses.

c)     Dividend yield tends to be high for good reason: The market anticipates further declines and/or dividend cuts due to the looming recession.

d)     Don’t touch dogs. I pains me to say that Spain is not US, not even Germany, and  not even France. While I am no fundamentalist, I have eyes to see that Spain is besieged by problems and has fallen prey to a socio-communist government. Not the best political setting for enterprises and the market knows it (in spite of the Spanish sedated press)

Hence, even if the ongoing decline is annoying to us Dow Theorists, we should take solace in knowing that:

a)     We follow US indices (other countries are suffering much more, as they are not so business oriented as US, and their economies lack the flexibility of US).

b)     The losses that we may be temporarily undergoing under trend following will pale by comparison to those of buy and hold.

c)     In such moments, it is good to take the long term view. The last 21 years for those following Schannep’s rules have been pretty good as there has been outperformance and greatly reduced drawdowns (both in time and depth). Please mind, I write “rules” instead of “Dow Theory”, as he also has the “timing” indicator which is another gem in Schannep's trading arsenal You’ll find a quite exhaustive study here.

Of course, the secondary trend is also bearish.

Under the Rhea/Classical Dow Theory

The primary and secondary trend turned bearish on March 9th (once again: the lows of the last completed secondary reaction violated) as explained here.

The primary and secondary trend were signaled as bullish on 02/19/2020, as explained here.

In just four days SLV declined drastically and almost violated the last recorded primary bear market lows. GLD declined but on a much more muted basis. Hence, the decline does not meet the time requirement for a secondary reaction.

The primary trend was signaled as bearish on March 11th, 2020.

Following the turmoil which afflicted markets last week, SIL violated on 02/28/2020 the lows of the last completed secondary reaction, which also constitute a valid exit signal (especially
under the Classical Dow Theory), unconfirmed by GDX. On March 11th, 2020 GDX confirmed, and, thus, we got a primary bear market signal.

By the way, I’m beginning to making a habit not posting in the very same day when a new signal is given. As I wrote in my last post, this blog is about learning and perfecting our Dow Theory knowledge. It is not supposed to be a subscription service with trading alerts.

I don’t have much time left. It suffices to say that the current trade was a winner. The spreadsheet below shows the dates of entry and exit and their respective closing prices. As you can see, SIL, the weakest of the pack, made 0.63% whereas GDX made 19.35%. While I don’t necessarily advocate for splitting one’s funds 50/50 (as there might be better options to be explored in the future), if one had done so the average gain would have been 10% 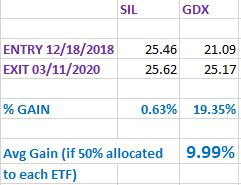 As to the time duration, the now bereaved primary bull market has lasted almost 15 months, which is quite in line with an “average” bull market. Within this context, it is important to take the long term view. When I started this blog some 7 and odd years ago, I encountered some trades that lasted less than “average”. At the risk of too much reiterating, when trading long term with normally less than one trade per year, one must be patient before making assessments. We need a large enough sample. So some times we will get trades of short duration, others will be average, and occasionally we'll stumble upon +2 year trades. Once again, long term view, but the good one: the long term view of a trader that contains drawdowns. Not the blind long term view of buy and hold.

Here you have an updated chart which contains the last completed secondary reaction (left, orange rectangles) the subsequent rally and the final breakdown.

Depending on the way one appraises the secondary reaction that led to the setup that resulted in the primary bull market signal, the primary bull market was signalled either on 11/19/2018 or 12/18/2018. Rhea wrote that the definition of secondary reaction is not carved in stone. The signal of 11/19/2018 was obtained by being satisfied with just 14 trading days for TLT and 15 days for IEF. The signal of 12/18/2018 was obtained by being strict and demanding on a confirmed basis at least 15 trading days on both ETFs. It’s up to each investor to decide what to do (i.e. to commit to each signal 50% of one’s equity or go fully invested with just one signal).

However, I see a couple of small green shots (very small, to be truthful):

1.      For the last three trading days, and in spite of US stocks making lower lows, TLT and IEF seem to be taking a pause, and have refused to make higher highs. This is good.

The behavior of US interest rates during these days of crisis reminds us that some bonds belong in many peoples portfolios provided they are under a bullish trend under the Dow Theory. Following Antonacci's idea contained in his excellent book "Dual Momentum Investing", for some investors a 60% stocks/40% bonds portofolio with a trend filter (when trend down go to cash) might be a sensible idea. Please mind that I wrote for "some" investors. Not all.

Posted by The Dow Theorist at 6:08 PM