Setup for a primary bull market in SLV and GLD explained

The primary trend, signalled on 10/25/2019, remains bullish as was explained here and here. On February 5th, the S&P 500 bettered its last recorded primary bull market highs unconfirmed. On February 6th, the Industrials confirmed.

However, to be “in the clear” (and to be more optimistic about the actual bullishness of the market) we need confirmation from the Transports. I am personally bothered by the persistent weakness of the Transports which have not been able to better their all-time closing highs of 09/14/2018, and, more recently, their last recorded primary bull market closing highs of 1/17/2020 .

All in all, the primary bull market continues, and we “reset” the clock to zero in order to appraise the next secondary reaction. Now both the primary and secondary trend are bullish.

It is important to note that Schannep, of thedowtheory.com who normally sees the bottle half full, in his most recent letter to subscribers has shown some skepticism as to the continuation of this bull market. His last letter is a real tour de force which every committed investor should read several times to let all the wisdom soak in. I also wrote some days ago that my own personal trading reflects underlying weakness still not fully manifested in the indices.

Under the classical/Rhea Dow Theory

If we appraise the trend under the “Rhea/classical” Dow Theory, the primary trend is bullish since April 1st, 2019, as was explained here

The secondary trend is bullish, as the Transport bettered on January 14, 2019 their secondary reaction closing highs (of 04/29/2019) hence confirming the Industrials.

The secondary trend is bullish (secondary reaction against the primary bear market) as was profusely explained here.

Now, dear readers, pay attention, as we have an interesting technical situation.

As you know, and as I wrote here, there are several alternative primary bull (and bear) market signals. The most frequent one is the following sequence: Primary bear market lows, rally (secondary reaction), pullback and breakout above the secondary reaction closing highs.

However, there is also an alternative primary bull (bear) market signal, namely that off the primary bear market lows a powerful rally emerges without any pullback which finally breaks up the last recorded primary bull market highs. The third one, not applicable in the current SLV/GLD situation, is the breaking out of the closing highs (lows) of the previously last completed secondary reaction.

Here you have the coarse chart depicting the three alternative bull market signals. 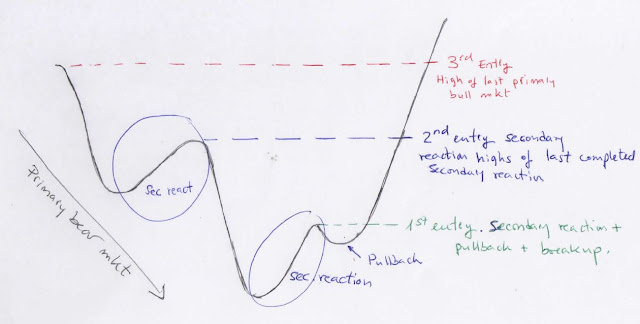 On the other hand, more recently, the setup for a “normal” primary bull market signal has been completed. Following the secondary reaction closing highs of 1/7/2020, there was a pullback on both precious metals which completed the setup for a primary bull market signal. The pullback of -4.95% complied with the minimum volatility requirement which currently stands for SLV at 4.58%. Please mind that when I deal with assets other that US stocks I adjust the minimum volatility requirement (3% for US stocks) to the volatility of the asset concerned. In other words, if the daily percentage change, averaged over a large number of days, of the asset “A” doubles that of the SPY (or S&P 500), for a movement to be meaningful I will demand a minimum percentage of 6% (2 x 3%). I calculated the 1000 days average of the daily volatility for both SLV and the SPY and the volatility adjusted figure reads 4.58%. Hence a pullback of -4.95% is relevant and should be taken into account in order to conclude that the setup for a primary bull market signal has been fulfilled. GLD, though, has not reached the minimum volatility requirement. However, this is immaterial, as the principle of confirmation is not applicable to the final pullback. More about the nuances concerning the principle of confirmation, which are vital to a proper application of the Dow Theory, here:

Here you have the spreadsheet with the specific dates and calculations:

The charts below display the current situation. The green thick horizontal lines display the price level of the last recorded primary bull market closing highs. As I explained above GLD broke up above the relevant level unconfirmed, and hence there was no signal, and there will never be, as the “normal” signal (blue horizontal line) is at a lower level.

The primary trend is bullish since 12/18/2018 as explained here. No changes. This specific signal is now more than one year old. Hence, we are dealing with a trade whose duration seems quite in line with what is to be expected under the Dow Theory (trades lasting more than one year on average, please mind the word “on average”).

From that date GDX flirted with violating its secondary reaction closing lows which it did not. SIL was much stronger and has hitherto remained at a safe distance of those lows.

As it was explained here, TLT and IEF (two ETFs that relate to US interest rates) are in a bull market (since 12/18/2018 or 11/19/2018 depending on the way one appraises the secondary reaction). I also explained that they are currently under a secondary reaction. Here you have an updated chart displaying the current situation. As you can see from the charts, both ETFs are close to bettering their last recorded primary bull market closing highs.

Posted by The Dow Theorist at 5:23 PM