Likely secondary reaction in US treasuries

This is going to be a long post. It took time and dedication to write it, and to fully apprehend its implications (especially for precious metals and interest rates), one should take also time to read it. No pain, no gain.
US STOCKS

The primary and secondary trend turned bullish on October 25th, 2019, as was explained here and here

The primary trend (and secondary one) turned bearish on November 8th, 2019

Here you have the charts displaying all the market action since the 12/24/2018 (date of the primary bull market signal) to date. As you can see (orange rectangles on the middle of the charts) there was a secondary reaction which did not result in a primary bear market as higher highs ensued.

Hence, in order to really determine whether the trade closed yesterday has really outperformed buy and hold, we have to wait until we know when this new bearish swing comes to an end. Now we have a “winning” trade, but we don’t know whether it has outperformed buy and hold yet. To know this, we have to wait until the next primary bull market signal which will establish the final primary bear market lows.

Thus, the following calculations do not relate to the outperformance of this trade, but serve to keep track of the important issue of “further declines following a primary bear market signal”. 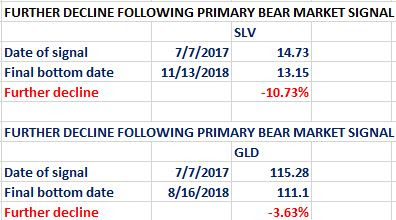 Let’s look at SLV. On the one hand, the decline that followed the primary bear market signal was quite OK (-10.73%). This was lost to buy and hold, and “won” by trend following (Dow Theory). Furthermore, you can see in the charts that the entry price (12/24/2019) was at a lower level than the previous exit price due to the bear market signal (07/07/2017). Moreover, SLV has made an absolute gain (exit minus entry price) of 13.19%, which is a very good trade for slightly less than one year time.

GLD had a more modest further decline following the primary bear market signal of just -3.63% (nonetheless, this adds to the “outperformance” side). Given that the “further decline” was modest the entry price on 12/24/2019 was at a higher level than the previous exit price. This notwithstanding, GLD managed to win 14.47% on this trade.

Since one never knows in advance which of the two precious metals is going to result in better performance, my piece of advice is to split 50% the trading funds to each of the ETFs. If we had done so, our average performance SLV+GLD would have been of 13.83%.

All in all, a winning trade. Furthermore, and I hope to give more precise figures in the future, the Dow Theory has been particularly good at outperforming buy and hold during the long secular bear market that plagued precious metals since 2011. While, of course, it is difficult to extract positive performance when the secular tide is bearish, the Dow Theory has clearly outperformed buy and hold. In the past, I did yearly appraisals of the performance, which you can find here, here and here

However, due to lack of time, and more specifically because I feel that to truly determine whether the Dow Theory really works we need to take a longer perspective (at least 5 years), I discontinued such annual analysis (even though the Dow Theory tends to outperform buy and hold in most years). When time allows, I plan to make an assessment of how the Dow Theory versus buy and hold since I started the blog in 2012.

As an aside, the much longer term trend when appraised with weekly bars is bullish. Yes, on 07/01/2016 the primary trend (appraised with weekly bars) turned bullish. To this date it has not been reversed. This implies that, it is quite likely that we will not see lots of further decline following the current primary bear signal. Time will tell. However, as I’ve written in the past, I trade based on the signals arising out from daily bars (closing prices), not on trends discerned when plotting weekly bars. However, it is always informative to have a bigger timeframe. The bigger picture tells us that the trend is bullish. Below the weekly charts for SLV and GLD

While US interest rates is not the main focus of this blog, it should be so if I had more time. I have written in the past that interest rates are even better suited to the Dow Theory (or trend following in general) than even US stock indices. I’d further add that given that US interest rates tend to fluctuate slowly, the daily volatility of interest rates ETFs (especially for those in the short term spectrum) tends to be substantially lower than that of US stock indices. It is my contention (derived from my short term trading) that the lower the volatility, the less likely is to experience whipsaws (and hence the more profitable will be trend following versus fading the trend). Thus, interest rates are less prone to reversals which, in more volatile markets, can lead to false Dow Theory signals. Of course, the relationship between volatility and the Dow Theory is a subject to be dealt with in a future post of this Dow Theory blog.

Well, TLT and IEF have had a beautiful bull run. Depending on the way I appraised the secondary reaction leading to the setup for the primary bull signal, the bull market was signaled either on 11/19/2018 or 12/18/2018. From those dates there has been a bull run that wasn’t even interrupted by a secondary reaction.

However, on 11/08/2019, I feel that one could conclude that a secondary reaction has been signaled. The time requirement has been amply met. We have had more than two months of declining prices. As to the extent requirement, TLT has retraced ca. 36% of the bull market swing that started at the primary bear market lows of 11/02/2018.

IEF has roughly retraced 27.5% of the bull market swing that started at the primary bear market lows of 10/05/2018. So IEF has not managed to retrace the famous 1/3 alluded to by Robert Rhea. However, as even Rhea himself suggested (page 61 of his book “The Dow Theory”, Fraser Edition 1993) the definition of secondary reaction is not carved in stone. Furthermore, as I wrote here, I feel that the more “time” we have, the less “strict” (but be cautious!) we can be with the extent requirement.

In this specific instance, we have had more than 2 months of declining prices which greatly exceeds 3 weeks. Furthermore, we have had almost a year (since the signaling of the primary bull market) without a secondary reaction (which is not normal, as bull market swings get often interrupted by secondary reactions). Hence, when I consider all factors, I consider that the current decline may be qualified as a secondary reaction. One option for the actual trader of IEF and TLT could be to split its capital. One half considering that a secondary reaction has been signaled (which might lead to a primary bear market signal in the future) and one half as if nothing has been signaled (waiting for the 1/3 retracement on a confirmed basis). Readers of this blog also know that I am a firm believer in generating many trades in order to reduce drawdown duration. Hence, in doubtful cases, such as this secondary reaction, there would be nothing wrong with trading ½ of capital in different ways.One half assuming that there is right now a secondary reaction (which might be followed by a bear signal); the other half waiting for more declines in IEF so that the 1/3 retracement requirement is also fulfilled.