When and how much to buy. Transitioning from a 25% to a fully invested position

As a reminder, I have been writing about capitulation in the following posts.

Well, I finally squeezed some time out of my agenda to pen another post concerning Schannep’s capitulation indicator.

Today we will address the vital issue of position sizing. How much to buy and how to transition from partially invested to fully invested.

Schannep describes in his book three main “tools”. The first one is what I call “Schannep’s Dow Theory”, this is the venerable Dow Theory updated (and improved, as explained here) by Schannep. These are the typical “buy” and “sell” signals which follow primary bull and bear market signals. The second one is “capitulation” which we are explaining in this saga. The third one is the so called Schannep’s “timing indicator”. Even though Schannep gives us in his book some explanations about such an indicator, the fact remains that it is not fully made known to readers, and it has nothing to do with the Dow Theory (it incorporates some trend following –momentum- but also monetary policy). In my personal trading and in this blog, I don’t use the timing indicator. Not because I consider it bad (its track record is as good as that of Schannep’s Dow Theory), but because I don’t know its entrails. And without full knowledge I cannot go all in. And it is pity because the timing indicator provides more “smoothing” as it is an additional source of signals. Readers of this blog know that I always insist that the more good quality signals (aligned in our time frame, without becoming short term traders) we get, the better, as it is likely to smooth out our equity curve (less drawdowns, and more importantly, less time in drawdown). The “timing” indicator has been particularly useful since 2011 when Schannep’s Dow Theory, while remaining positive and containing drawdowns, has had a tough time (some whipsaws, which is something totally normal in trading), even though it remains clearly positive. All in all, given the extraordinary run-up of the S&P 500 since 2011, almost all trading systems are doomed to underperform. As I have written many times the Dow Theory outperformance is made when buy and hold stutters. We need big declines in buy and hold for any only long trend following system to outperform.

As an aside, this is why I am so fervently studying ways of generating more signals. The more experience I have the more I am convinced that when doing trend following it is impossible to be successful at all times. Trend following tries one’s patience. In the long run, trend following will shine, but the “long run” is indeed very “long” when one has real money on the table. One of the things I like of my short term trading (1-4 days) is that I generate many trades. Hence, even if my system (or blend of systems) is not the best one in the world, by having many strategies working together I make sure that, even though market conditions change, I always have at least one strategy that is doing well. And those that do “less well” do not decimate me, as any good trading system manages to win big when the tide is favorable and lose little when things are tough. Hence my short term trading works (at least for me) because I have several strategies and, at the same time, I generate many trades. A normal day may entail buying or selling short between 4 and 10 stocks. Most of the days, I get some longs and shorts. If the market rallies my shorts will be modest losers most of the time but my longs will do really good. All in all, on average is a profitable system. But what I especially like is that so many trades tend to result in modest drawdowns both in time (i.e. longest drawdown 6 months) and depth (i.e. deepest drawdown around 10%).

Of course, such modest drawdowns in time are almost impossible to obtain with long term trading (i.e. The Dow Theory). Hence, I am quite obsessed with generating more trades (provided they are quality ones, which I am trying to attain by diversifying markets and alternative definitions of secondary reactions). Therein lies the importance of the timing indicator and capitulation. Both provide a little bit of diversification (more rules to define an entry, and with the timing indicator an exit).

I explained all this, because Schannep himself trades with both his Dow Theory and the “timing” indicator which results in what he calls the “composite” indicator. The position sizing for “capitulation” trades when using the composite indicator is, as per, Schannep 50%.

However, when just using his Dow Theory, the position sizing, the initial commitment when capitulation occurs is just of 25% (page 102 of his book).

As I explained here, the time requirement for a secondary reaction gets shortened when capitulation has occurred.

Hence, once we have a rally following capitulation of at least one week (on a confirmed basis), we will declare the existence of a secondary reaction. Following the secondary reaction we will wait for a pullback of at least 3% in one of the three indices. Once the 3% pullback occurs we will immediately buy an additional 25% (this is the only instance in Schannep’s Dow Theory where we anticipate the bull market signal). The final 50% is bought when the pullback stops, a new rally follows which breaks up the secondary reaction highs, thus signaling a primary bull market signal.

The “pedestrian” chart below illustrates the specific process of transitioning from a cero position to a 100% invested position following capitulation. 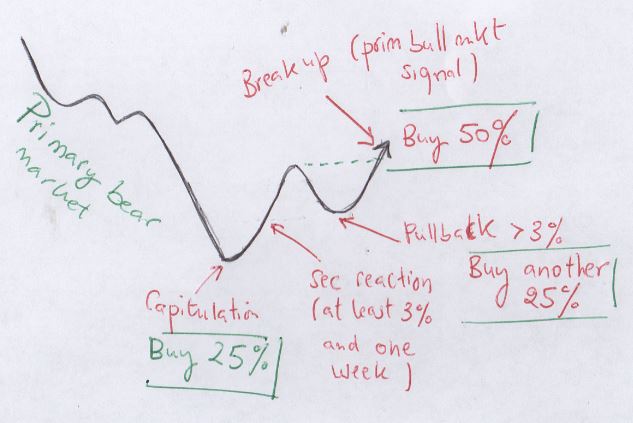 Theoretically, once I have explained how you go long following capitulation, I could finish here this capitulation “saga”. However, it is now, after initiating or completing a long commitment following capitulation when things get interesting. Now you have to manage your position. What happens if the market starts to go down? Where we will get out? When a new primary bear market signal gets signaled? Later? How do we ride “capitulation” during the market meltdown of 2008? What if the decline is coupled with a new capitulation? These are questions that will besiege us when doing real trading. We better have a clear roadmap before we are confronted with them. The next posts will focus on what happens next.