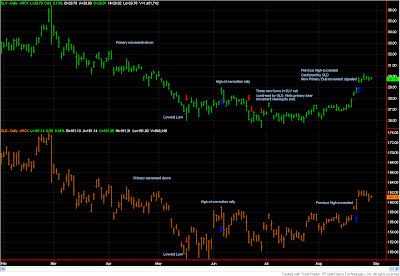 Yesterday we discussed that a new primary bull market in gold and silver was born as per my interpretation of the Dow Theory.

Today, we are going to look into the details of the Dow Theory signal.

In 5/16/12 we had the last leg down (primary movement) in both indices that established new lows for the move. These are the prices to note:

Thereafter, there was a rally, namely:

Thus, both rallies qualify as a correction of the previous primary down move, since both movements exceeded 3% and lasted more than 10 trading days. Three percent (3%) is the minimum magnitude under Dow Theory of a movement to be considered as significant. Under Dow Theory a rally (or decline) must last at least 10 trading days to be considered as a correction of the primary move.

From that point on, both markets staged a new leg down. However, gold refused to make a lower low (that is that the lows of June at 149.46 were not violated).

However, silver made new lower lows on 6/21, 6/22 and 6/28/2012. Such new lows were not confirmed by GLD. Under Dow Theory this lack of confirmation by GLD hinted that the primary bear market movement was likely getting exhausted.

Little by little both markets staged a new rally and:

So with one day delay (also bullish sign, the shorter the delay for the confirmation, the better) both GLD and SLV have bettered their previous secondary correction highs.

Under Dow Theory we got a primary bull market movement signal.

The only negative note, however, is the mining indices. Hitherto they have refused to better their previous highs.

Posted by The Dow Theorist at 8:58 AM