Dow Theory Update for July 6: U.S. bonds are in a secondary reaction against the bear market

Are bonds signaling an impending recession?

I am writing before today's close, so things might change. Readers beware.

The primary trend was signaled as bearish on 1/5/22, as I explained here.

On 6/13/22, the primary trend was reconfirmed as bearish with lower confirmed lows.

Following the 6/14/22 closing lows a new rally started. On 7/5/22, TLT and IEF have bounced for 13 trading days, which satisfies the time requirement. As to the extent requirement, it has amply been met (7.28% for TLT and 5.57% for IEF, which vastly exceed the Volatility-Adjusted Minimum Movement, VAMM), as you can see in the Table below.

So now we have the following options:

a)      a) If a pullback unfolds, lasting at least 2 trading days and with at least one ETF exceeding the VAMM, then the setup for a potential primary bull market signal will have been completed.

b)      b) Suppose no such pullback develops and TLT & IEF continues going up. In that case, a confirmed breakup of the highs of the last completed secondary reaction (violet rectangles) would signal a primary bull market as well.

c)      c) If both ETFs roll over and pierce their 6/14/22 lows jointly, the primary bear market would be reconfirmed.

The charts below display the most recent action. The violet rectangles with the horizontal blue lines show the highs of the last completed secondary reaction, which is a valid breakup point to signal a primary bull market. The blue rectangles on the right side of the charts highlight the current secondary reaction. 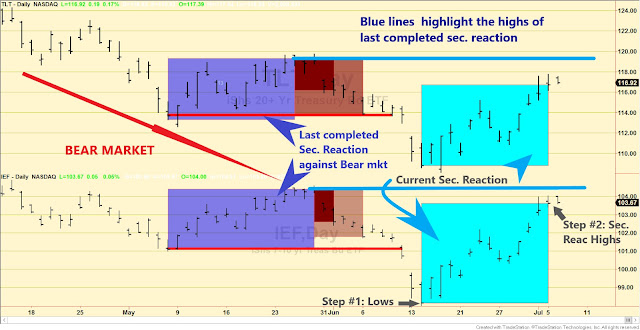 It looks like the bond markets see a recession ahead: flight to safety and lower inflation.  However, the bond’s market verdict will be more precise once the primary trend turns bullish, which is not the case right now as we are merely dealing with a secondary (bullish) reaction amid a bearish trend.

In my 12/3/21 post, I wrote that the rallies that had until then developed did not qualify as a secondary reaction. The situation has not changed, as the current rally has not fulfilled the time requirement. Newer lower lows on 6/10/22 by IEF and 6/13/22 by TLT reconfirmed the primary bear market. The bounce that started off the 6/14/22 lows has not reached the minimum 3 weeks (15 trading days), so we cannot talk of a secondary reaction. So, the primary and secondary trend remains bearish.