As a reminder of why I use two alternative definitions of a secondary reaction, please read here.

One legitimate interpretation of the appraisal of secondary reactions under the Dow Theory let us conclude that the primary trend turned bullish on April 9th, 2020, as explained here.

On August 5th, 2020, both SIL and GDX made their last recorded highs. From that day, prices dropped for 34 trading days until the final bottom made on September 23rd, 2020. So the time requirement for a secondary reaction had been met. Both in terms of volatility and retracement the pullback met the extent requirement as well. An in-depth explanation of the appraisal of the secondary reaction is to be found here.

Following the September 23rd closing lows, there was a rally until 11/6/2020 (SIL) and 10/14/2020 (GDX). The magnitude of the rally (both in terms of time and extent) unambiguously qualified as a proper rally to setup SIL and GDX for a primary bear market signal. Here you have a table displaying the specific values:

All in all, while I continue to see lots of bullishness around precious metals in the media, what I see on the charts is a primary bear signal, which means that more likely than not that lower prices may be in store for us. Furthermore, the issue of bullishness and bearishness is relative. It depends on one’s time-frame. If we were secular investors with a high drawdown tolerance (which I have not), then we might be entitled to a bullish assessment. If we were day traders, today’s action would be most bearish. In our Dow Theory micro world, we know that our trades tend to last on average 1 year, and within this time-frame, I know that it is more likely than not to see lower prices for the next few months. Please also mind that both in US stock indexes and precious metals, a primary bear signal does not entail in all cases a colossal crash. No. In a few instances, our bear signals will help us avoid a crash (i.e. a further decline following the Sell signal of -25% or more). However, on many other occasions, the fall that follows is of more modest proportions. The key point is to know that we fare better by honoring all primary bear market signals (less drawdown and, normally, some out-performance) than by being buy and holders.

Of course, it could be a failed signal (meaning that we’d be obliged to re-buy at a higher price level) if the decline following this Sell signal has little follow-through. However, as Rhea was fond of saying, in the not so probable event of having to buy at a higher level, this would be the insurance premium we pay to protect ourselves against a huge drop in the markets. Please mind that, as far as I am aware of, no significant decline has been recorded before the onset of a primary bear market (in stocks this is well documented, and with precious metals this has been my experience since I’ve been blogging).

As I explained in my post of October 8th, 2020, no secondary reaction had been discerned when one sticks to the “mainstream” interpretation of the Dow Theory, which requires more than three weeks of declining prices and a confirmed retracement of 1/3 of the previous bull market swing.

Therefore, since we didn’t have a secondary reaction, no primary bear market has been signaled today.

Give that both the time and extent requirement have been fulfilled, we can declare the existence of a secondary reaction. From now on, we look for the end of this pullback and the start of a rally that sets up both ETFs for a primary bear market signal. So, let’s keep our eyes glued to the charts in the coming days.

The table below highlights the key price levels and retracement calculations: 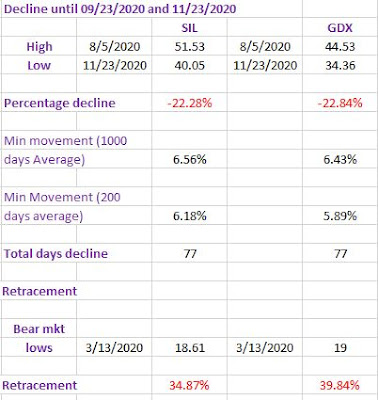 The charts below display the start of the bull market swing at the 3/13/2020 bear market lows (botttom) until its confirmed closing high of 08/05/2020 (highlighted by the curved blue lines) and the subsequent secondary reaction (orange rectangles).

Posted by The Dow Theorist at 7:44 PM