Secondary reaction for SIL and GDX too

Introductory note: In this post, I wrote a thorough explanation concerning the rationale behind my use of two alternative definitions in order to appraise secondary reactions.

A) Market situation if one is to appraise secondary reactions not bound by the 3 weeks and/or 1/3 retracement dogma.

The primary trend was signaled as bearish on 11/27/200, as was explained here.

Off the hitherto 11/27 closing low, SLV rallied for 15 trading days, and GLD rallied for 13 trading days. So the time requirement when we allow for some flexibility (as Rhea did) for a secondary reaction was met.

As to the extent requirement, I performed some calculations, which you can see in the table below:

The minimum movement for US stock indexes is 3%. A movement less than that is not to be considered. When we are outside of the realm of US stocks, I think we have to consider the volatility of the asset in question and compare to that of the S&P 500. I calculated a 1000 days moving average of the daily percentage change for both the S&P 500 and GLD and SLV. A more in-depth explanation about volatility-adjusted calculations here. 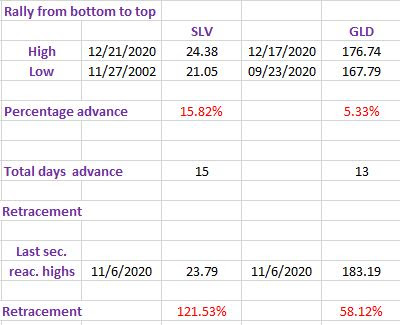 So as you can see, there is no doubt as to the existence of a retracement exceeding 1/3 of the previous bear swing.

Now take a look at the charts of SLV (top) and GLD (bottom):

The light blue horizontal lines display the highs of the last completed secondary reaction. Not those of the current one, but the previous one. The breakup of such highs (lows) is a valid Dow Theory signal, as I have profusely explained on this blog. As you can see, SLV did break topside its last recorded secondary reaction highs. However, GLD did not confirm. Absent confirmation, no primary bull market signal was given.

So, where do we stand now?

1. If GLD rallied and broke up above its 11/6/2020 secondary reaction closing highs (blue horizontal line, bottom chart), a primary bull market would be signaled.

B)  Market situation if one sticks to the traditional interpretation demanding more than three weeks of movement in order to declare a secondary reaction.

However, SLV broke up above the last recorded secondary reaction highs of 11/6/2020 unconfirmed by GLD. Thus, no primary bull market signal was given.

The charts below display the current situation. The grey rectangles on the right side of the charts show the ongoing rally, which does not qualify as a secondary reaction yet. Hence the grey color, which I use it to denote neutrality (blue is bullish, red/orange is bearish). You can see that SLV (top chart) broke topside the blue horizontal line, which corresponds to the price level of the 11/6/2020 closing highs (highs of the last completed secondary reaction).

While I don’t have the time to give you full calculations, the blue rectangles do qualify as a secondary reaction even when we apply the Dow Theory according to the “mainstream” interpretation. The rally lasted 32 trading days, and it retraced almost  45% for SLV and 44% for GLD of the previous bear swing. So the minimum 1/3 requirement was also met. Accordingly, given that the blue rectangles constitute a secondary reaction, its confirmed breakup would entail a primary bull market signal.

I’d like to write about SIL and GDX, as I see a secondary reaction completed (when being under the “shorter” time-frame). You can find the last update for SIL  and GDX here. Hence, we should be on the lookout for a primary bull market setup if we had a stronger pullback. Since tomorrow I will not work, and thereafter comes the run-up to our monthly Letter to Subscribers at thedowtheory.com, it is quite unlikely that I will post until the first days of 2021.

So I wish you all a Merry Christmas and a great and hopefully virus-free 2021.

Posted by The Dow Theorist at 8:33 PM