The Dow Theory has it that higher highs (lows) unconfirmed have no validity in signalling changes of trends. We also now that the principle of confirmation has more validity the longer the time frame. Thus, a change of the primary trend signaled by the breaking up/down of the secondary reaction highs/lows has more validity than the breaking out of a minor pivot point.

Divergence entails one index going up whereas the other is going down. So what’s the use of divergence under the Dow Theory? Divergence acts as a kind of yellow traffic light. There are three uses of divergence:

1.      Divergence serves us to occasionally disregard primary bull/bear market signals. Schannep in real life (Letters to Subscribers and his personal audited portfolio) has done so several times, all of them with success. A future post will analyze how Schannep uses divergence as a warning sign. Divergence as a tool to make an educated guess as to when to disregard a Buy/Sell signal has been proven helpful to avoid being whipsawed in the past, and will likely continue in the future.

As I explained here, Rhea, after spotting divergence, normally waited for a small confirmed pullback of a few days. By “few” I mean as little as one or two days followed by a small rally which fails to better the last recorded highs on a confirmed basis. Thereafter, both indexes should breakdown the small pullback lows. Rhea paid lots of attention to the volume of the decline that led to the day of the breakdown. He also looked at the volume on the day of the breakdown. Increasing volume tends to imply that lower prices are ahead (that is a secondary reaction). On such a breakdown, and provided other factors where met, Rhea used to partially or totally sell his positions. One thing is clear, while Rhea was a trend follower in the sense that he never fought against the primary trend as determined by the Dow Theory, he did not advice to buy or sell at the very primary bull and bear market signals. He tended to unload at the star of a secondary reaction and replenish his line once there were signs that the secondary reaction had run its course. Please mind that Rhea’s Dow Theory is not exactly the same as Schannep’s Dow Theory (more accurately, “The Dow Theory for the 21st Century”) and hence, I don’t advocate timing secondary reactions when under the realm of Schannep’s Dow Theory. One day, I will write in depth why. We are dealing with two different beasts.

3.      Paradoxically, divergence also serves to further validate the primary trend once divergence stops and the two (or three under Schannep’s Dow Theory) indexes are back in sync. Thus, after some days of divergence, a breakup in the direction of the primary bullish trend, tends to be followed by more strength.

So armed with this knowledge, let’s have a look at gold and silver.

The primary trend, it is bullish irrespective of the way you appraise the primary trend since 2/19/2020. An in-depth explanation of the current trend here.

As you can see in the chart below starting 07/23/2020 we had 3 days of divergence (highlighted by red arrows). SLV (silver ETF) closed down whereas GLD (gold ETF) closed up. Following this period of indecision, there was what seems a blow off move (for SLV on higher than average volume for GLD on normal to higher volume) until 08/06/2020 when higher highs were made on a confirmed basis. Yesterday, Friday 08/07/2020 both precious metals declined on slightly higher volume.

So those intend on trading secondary reactions may well monitor the action that will follow in the next few days. It is up to each trader to decide what to do. As a reminder unrealized profits are mounting as you can see in the table below: 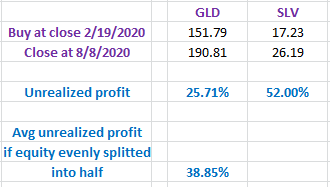 It is worth mentioning that SIL and GDX (the silver and gold miners ETFs) have declined for two days, hence providing another source of divergence.

As to the trend of SIL and GDX, it is bullish any way we measure, as was explained in depth here. 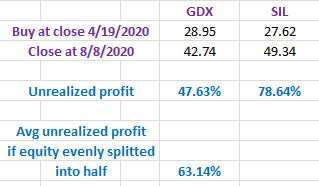 Final thought: The trades taken in pursuance of the Dow Theory closely resemble the pattern of trades taken with most trend following systems (albeit there is a larger percentage of winners). Most of the winning trades tend to be of modest proportions. Losers are well contained. However, every now and then, there is a huge winning trade. In our trading life years pass and performance albeit normally positive remains muted. The patience of many investors gets tested. When many throw in the towel, then the big trade sets in. In trading, and especially when longer term trading, we don’t have the privilege of generating many trades so that the big one may take quite a long time to materialize. This is why investors should strive for strengthening their patience, and, just in case patience remains weak, generating many trades (several time-frames, several asset classes) so that the time between big winning trades is shortened.