Another environment which is detrimental to the Dow Theory is weak cyclical bull markets.

In my post concerning the “stress-test” under secular bear markets, it was shown that, in spite of secular, headwind, the Dow Theory (especially Schannep’s) was able to remain positive and outperform buy and hold. However, secular headwind took a toll on performance. While positive, it was less than that attained when there was a secular bull market environment.

To begin with, how do we define “cyclical markets”? While there are lots of diverging opinions when it comes to defining them, I’ll stick to Schannep’s definition, which I honestly feel is very accurate and even actionable (albeit with a lesser performance than the Dow Theory itself). According to Schannep a cyclical bull market is one which advances 19% on both the Dow Jones Industrial Average and the Standard & Poor's 500 over any timeframe. A cyclical bear market is one which declines 16% on both the Dow Jones and the S&P 500 over any time-frame. Please go to Schannep’s website “thedowtheory.com” in order to further deepen the concept of cyclical bul/bear markets and its predictive power.

Those really intent on mastering the concept of cyclical bull and bear markets are advised to read chapters 5 to 7 of Schannep’s book “The Dow Theory for the 21st Century”.

Please find below a graph depicting the relationship between secular, cyclical, and Dow Theory determined primary bull and bear markets. 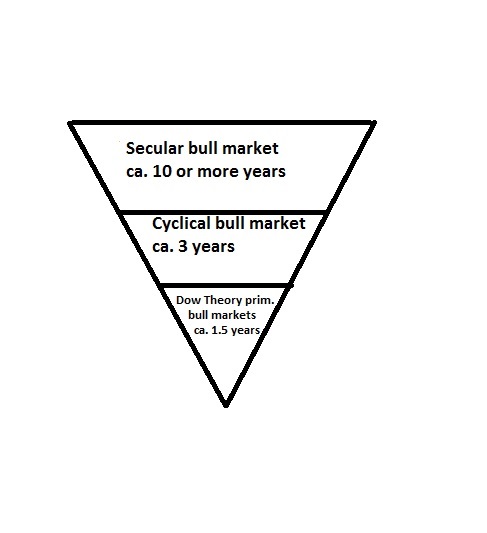 Our question is: How did the Dow Theory fare during such a tough period?

Since Schannep’s Dow Theory (which involves the S&P 500) starts in 1953, we have to follow the official “Rhea/classical” Dow Theory record in order to compare performances in the 1929-1942 period. Furthermore, I use the Industrials in order to assess performance.

Here you have the table containing all Dow Theory trades during this period:

The Dow Theory underperformed and only made 101% (see table above).

Hence, as it was seen with secular bear markets, weak cyclical bull markets are headwind for the Dow Theory. However, we see that it did not self-destruct.

All in all, even under week “cyclical” bull markets, the Dow Theory makes profits.