Schannep's answer to my explanations and further comments thereto

Continued from Part I and II:


I think we can boil our different readings of the Dow Theory down to just this:

I am relying on the italicized (and therefore most important?) first paragraph in Chapter XIII (p. 75) under "Determining The Trend" which you know what it says, in brief: "higher highs and higher lows offer a bullish indication. Failure of a rally (+3%) and ensuing declines below former low points, is bearish... to determine change of a primary trend".  Your chart shows the difference: 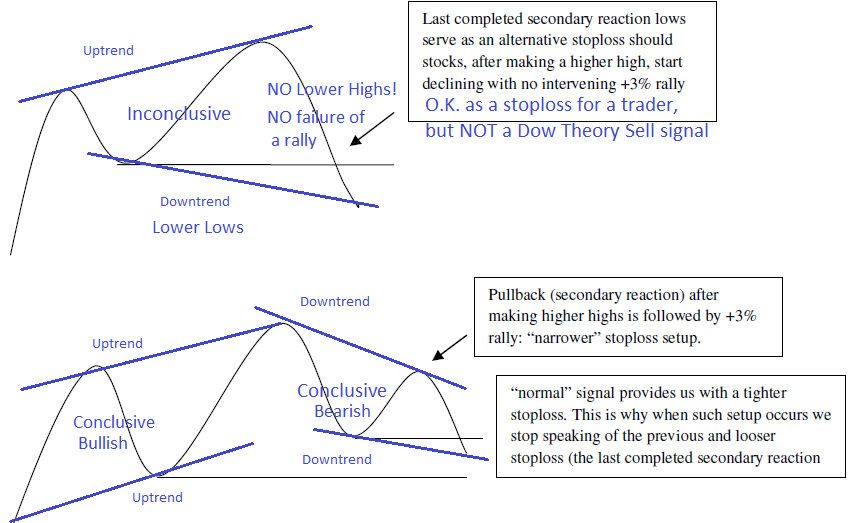 I realize you are depending on the follow up discussion (p77-78) that clearly says, in brief: "When declines...violate(s) the lowest points encountered during the last major secondary reaction...GENERALLY ASSUMED..the trend has changed to ....bearish".  It is immediately followed by "Occasional exceptions can be found, and it is proper that this should be true...."

I see this as one of those occasional exceptions.  I realize you (with your trader background) are very concerned about the market falling into "the abyss below" without a stoploss in place, but the fact is there is only one instance where the market has fallen so much as to require the 16% stop loss to come into play in the history of our Dow Theory for the 21st Century (and that is, after all, a stop loss).

I've enjoyed your dissecting of the other Dow Theorist's readings, which we are generally in agreement, so I see no need to continue with that.  I DO believe the above is the heart of the matter.  Of course you have my permission to use any part of my various responses to you in your writing up the comparison.

It is true that all three indices made confirmed higher highs (see chart below) on 9/18/2014 coupled with higher lows (the lows of the August secondary reaction were higher than those of the preceding secondary reaction of 02/03/2014). So, as per the general rule which Schannep mentions (page 75 Rhea’s book) we had the indication that the primary trend was bullish.


Schannep provides a graph which is based on the one I submitted to him (in black) with his views superimposed in blue, which provides us with further illustration (see above).

Schannep is keenly aware that p. 77-78 of Rhea’s book contain what I’d label the exception to the general rule. In spite of higher highs and higher lows, if the “lowest points encountered during the last major secondary reaction, it may be generally be assumed that the primary trend has changed to bearish."

Exceptions to general rules exist to precisely qualify the general rule and be mindful of reality.

Thus, we can say that “higher highs and lower lows are bullish (general rule), provided the lows of the last completed secondary reaction are not broken, in which case we may infer the trend has changed from bullish to bearish (exception to the general rule)”


Schannep is also aware of this. However, Schannep rightfully stresses that the exception to the general rule, has exceptions of its own. In other words, the exceptional rule (violating the lows of the last completed secondary reaction signals a new primary bear market) is subject to qualification. It is not black and white. This is why Rhea’s says, “generally assumed” and “occasional exceptions [to the exceptional rule] can be found.”

Schannep in this specific instance was of the opinion that the exception to the exception was applicable, and hence we were in one of those cases when “occasional exceptions can be found", which is tantamount to saying the primary trend continued bullish.

My judgment call was the opposite. I saw no basis to ignore the violation of the last completed secondary reaction lows and, hence, I declared a primary bear market.

So, we can conclude that both opinions were correct under a Dow Theory standpoint. Please mind that the process (the right comprehension and application of the Dow Theory) is more important that the specific outcome of the last Dow Theory signal (a winning or losing trade), as any given trade is almost akin to tossing a coin. Even a fool has good chances of being right in any one trade. Consistency of results (which results from the right application of the Dow Theory over time) is an entirely different matter.

This is the subject of the next post of this saga. And it is going to be vital, because you will see the thought process followed in order to apply the Dow Theory in real time under challenging conditions. However, I give you an “entrée”:  Schannep is the closest thing to having Rhea alive. In other words, Schannep is the best Dow Theorist alive (of this, I have no doubt, and the more I know him, the surer I am), and, in my opinion, he matches Rhea’s acumen and investing instincts. However, Schannep has not only intellect. He, like any Dow Theorist of to-day, has a wealth of market data (the Dow Theory track record) not available to Rhea, which enabled him, standing on the shoulder of one giant like Rhea, to make further refinements to the Dow Theory.

So, and I say this in full spirit of humility, Schannep’s “gut feeling” when it comes to applying exceptions to the exceptions, as in the current signal is not to be easily disregarded.

In the next post, and based on what I have read in Schannep’s market newsletters for the last few months, I will try to explain why I think he took a bullish stand and decided to apply the exception to the exception of the rule.

To be continued in, hopefully, the last episode of this saga.